Back before I was a blogger or even knew what a book pusher was, I put Enclave in everyone’s hands. When Enclave first came out, I was O B S E S S E D. Obsessed. I loved everything and anything about it. So when I learned Ann Aguirre was returning for another installment, I was giddy with excitement. I’m excited today to introduce you to Tegan, the star of Vanguard. Take a look, enter the giveaway, and CATCH UP if you slept on this series!
TEGAN 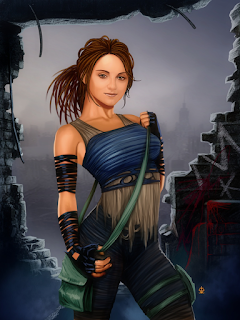 Age: 17 (in Vanguard)
Appearance: Tegan is small and slender. She walks with a limp and has a scar on her thigh, a result of a fight with the Muties that she barely survived. She has dark curly hair, golden-brown eyes, and light brown skin. Her style of dress varies, depending on where she is, and what she’s doing, but she prefers long coats with lots of pockets, belts with many pouches, breeches and boots. Sometimes she will put on a dress, though, if the situation requires.
Personality: Tegan is a guarded person, who often appears to be cheerful. She’s been known to lie, if she thinks deception will keep her safe or render her more sympathetic to others. As a result of the abuse she suffered after she was captured by the Wolves, she doesn’t trust easily. She has a hard time admitting to her actual emotions because she’s been hurt a lot in the past. Partly in self-defense, she tends not to bond deeply with people, as she doesn’t want to suffer if they leave or betray her. Tegan is very clever, good at studying and science. She’s prickly about her disability and she almost never accepts help from anyone else.
She’s incredibly loyal, once someone wins her heart and trust. That takes incredible patience, however. Science is her great love, and she mourns for all the knowledge that has been lost. Secretly she also nurses a yen for adventure. While she seems gentle, that is a cover for a quiet pragmatism that looks about the same to a less than astute observer.
Skills: She knows a lot about herbs and medicine. She’s an excellent healer and an adequate fighter.
Goals: To become the best doctor in the Free Territories. 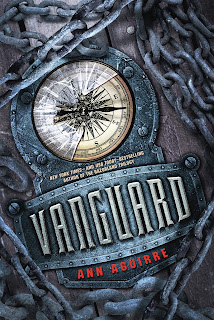 Release Date: July 25, 2017
Publisher: Feiwel & Friends
Find It: Goodreads | Amazon | B&N | iBooks | Audible
The Razorland saga continues. Since the war ended, Tegan has dreamed of an epic journey, so when she has the opportunity to sign on as ship’s doctor, she can’t wait. It’s past time to chart her course. Millie Faraday, the kindest girl in the free territories, also yearns to outrun her reputation, and warrior-poet James Morrow would follow Tegan to the ends of the earth.
Their company seems set, but fate brings one more to their number. Tegan will battle incredible odds while aiding Szarok, the Uroch vanguard, who has ventured forth to save his people. Szarok is strange and beautiful, like a flower that blooms only in the dark. She shouldn’t allow him close, as such a relationship is both alien and forbidden. But through stormy seas and strange lands, she will become stronger than she ever knew.
Ann Aguirre is a USA Today bestselling author with a degree in English Literature; before she began writing full time, she was a clown, a clerk, a voice actress, and a savior of stray kittens, not necessarily in that order. She grew up in a yellow house across from a cornfield, but now she lives in sunny Mexico with her husband, children, and various pets. She writes all kinds of genre fiction for adults and teens.
Website | Twitter | Facebook | Instagram | Goodreads | Tumblr
Tour Schedule
Week One:
7/17/2017- Two Chicks on Books– Interview
7/18/2017- YA Books Central– Review
7/19/2017- Tales of the Ravenous Reader- Guest Post
7/20/2017- Fiction Fare– Review
7/21/2017- Adventures of a Book Junkie– Interview