Hello everybody!! I hope you are having an amazing Summer so far this year. As for me, I am enjoying this Summer like no other. The reason for my bliss is my proclamation to read the things that make me happy. Well, my friends. SMUT makes me happy. That is not to say that I don’t love my Young Adult reads, because I still do, but I decided to incorporate a little more sass to my reading.
That being said, I have delved into romance of all types and have found that I adore romantic comedies the best. They are like a soothing balm to my soul and I am so grateful for each blush and chuckle. It is the best remedy for the reading blahs.
In honor of my new found bliss I wanted to share a couple of my favorite romantic comedy reads with you and will also welcome any new suggestions.
The Royally Series by Emma Chase

This ROYALLY series by Emma Chase is such wonderful treat. It is like the best sundae on a hot summer day. Deliciously sweet and gooey romantic with the perfect touch of smut that will make you smile from ear to ear. I began reading this series and was sooo into it that I blazed through the first two in less than two days.

“I’m not sleeping with you for money.”“Why not?”“Because I’m not a prostitute.”“Of course you’re not. But you’re young and beautiful, I’m handsome and rich. The more applicable question is why aren’t we fucking already?”That is a strong argument.” ― Emma Chase, Royally Screwed

“Who said anything about sleeping? I’m talking about sex. Good sex. Lots of it.”That puts a flush on her pretty cheeks and she laughs. “I don’t want to have sex with you.”I pat her hand. “Now you’re just being silly. The cat-and-mouse game can be tantalizing, but it’s not necessary.” My voice drops to a whisper. “I’m a sure thing.” ― Emma Chase, Royally Matched 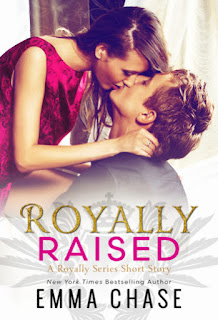 THE WINSTON BROTHER SERIES
Everyone in Green Valley, Tennessee knows that the six bearded Winston brothers have been imbued with an unfair share of charm and charisma… and are prone to mischief. Grin and Beard It

#2
Sienna Diaz is everyone’s favorite “fat” funny lady. The movie studio executives can’t explain it, but her films are out… #3
Make a deal with the devil and you might get what you want, but will it be what you need?

Now! I will admit that I normally like to start a series at the beginning but my first taste of the Winston Brothers came with my ravenous read of BEARD SCIENCE. This book was so adorably romantic and smart. I was instantly drawn to it when I read this line in the book description.

“Cletus Winston is a puzzle wrapped in a mystery covered in conundrum sauce, and now he’s in a pickle.”

How can one resist? I knew I couldn’t and his inner monologue is so snarky I would burst out laughing all the time.

“Crap. She’s going to cry. This was a situation that required neutralizing. I placed my hand over hers and gave her a squeeze. “There, there.” Fruit cake. “Calm down—” – Cletus. Penny Reid, Beard Science

Once you begin Cletus Winston and Jennifer aka Banana Cake Queen Sylvester’s story you will be floating in a cloud of laughter, romance and an ongoing drama that will have you white knuckling it.

I am going back to the first book TRUTH OR BEARD it next and will keep you updated.

The Pucked Series by Helena Hunting

I am so in “LOVE” with this series and have gotten my good friends Joss and Linda hooked on them also and that makes me so happy.  These books are the perfect blend of smut and romantic comedy which I absolutely adore to bits and pieces. All the characters (ALEX, VIOLET, MILLER, SUNNY, RANDY, LILY, LANCE, POPPY, and can’t wait for DARREN & CHARLENE’s story) have somehow found a way into my heart and I hold them to my GOLD standard of amazing.

There are so many laughs to be had with this series along with the amazing sexy times that I was throughly engaged and could not stop reading until I consumed ever single book in the series.

That’s my list of favorites for this first endeavor of #smuttysundays please comment and share what reads you think I would enjoy in the rom-com genre and hopefully you can pick a few reads yourself. Stay tuned for next Sunday.
Add a Comment
Share