“We are the light against the darkness. And now we’ve failed in our duty. Clarence is gone,” she said bitterly. “Escaped. He murdered an orderly. There’s no doubt it’s the same creature that ran loose in New York. None at all.”

Kat Ross, you have created a fan for life! I absolutely loved this, for many of the same reasons I loved The Daemoniac (the first book in the series) last year.
The Thirteenth Gate is:
“So, The Serpentine. It’s by far the closest one.” Sidgwick swallowed. “I went boating in Hyde Park just a few months ago. Are you saying—?” “That there’s a portal to the Underworld beneath the lake? Yes, but only in parts.”
The Thirteenth Gate is the second in the Dominion series but also connects with Kat Ross’ previous series, The Fourth Element Series. I’ve read The Daemoniac but have not yet dove into The Fourth Element Series (but did I pick up the first one as soon as I finished this one? You bet.). Readers who have picked up any of the previous books will welcome revisiting the world and characters and, for new readers, you get enough background info that you won’t be lost. The worldbuilding and setting up of the story never feels overstretched. Pieces of the story take place in New York and other times the setting is London, both richly painted yet the world has been updated to allow the paranormal elements to flow.
Fans of Sherlock + Supernatural will feel at home with the paranormal and mystery elements. I felt a sense of urgency as the two parties searched for the Thirteenth Gate, which will surely bring destruction to humankind. Nothing and no one is safe from the demon underbelly.
I can’t wait to see what the gang is up to in the next book. 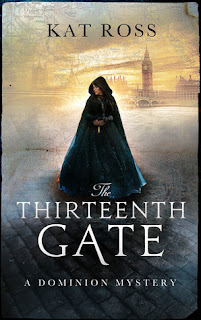 Winter 1888. At an asylum in the English countryside, a man suspected of being Jack the Ripper kills an orderly and flees into the rain-soaked night. His distraught keepers summon the Lady Vivienne Cumberland—who’s interviewed their patient and isn’t sure he’s a man at all. An enigmatic woman who guards her own secrets closely, Lady Vivienne knows a creature from the underworld when she sees one. And he’s the most dangerous she’s ever encountered.
As Jack rampages through London, Lady Vivienne begins to suspect what he’s searching for. And if he finds it, the doors to purgatory will be thrown wide open…
Across the Atlantic, an archaeologist is brutally murdered after a Christmas Eve gala at the American Museum of Natural History. Certain peculiar aspects of the crime attract the interest of the Society for Psychical Research and its newest investigator, Harrison Fearing Pell. Is Dr. Sabelline’s death related to his recent dig in Alexandria? Or is the motive something darker?
As Harry uncovers troubling connections to a serial murder case she’d believed was definitively solved, two mysteries converge amid the grit and glamor of Gilded Age New York. Harry and Lady Vivienne must join forces to stop an ancient evil. The key is something called the Thirteenth Gate. But where is it? And more importantly, who will find it first?
GIVEAWAY