Who’s ready to PLAY WARCROSS? Each Warcross team consists of Team Captain, Architect, Thief, Shield, and Fighter – and we are here today to create our own from (kickass female) YA characters! Here’s who we want in our arena when the VR world catches up!
Our WARCROSS Team
Captain.
Charlotte Holmes from A Study in Charlotte. A little gutsy, a lot smart, and somewhat unpredictable is what you get from Charlotte and why she needs to be the captain of this team.
Architect.
Dimple Shah from When Dimple Met Rishi. You want something done? Dimple is your person.
Thief.
Peekay from The Female of the Species. Slightly cunning. Good at distracting. Could disable the enemy and you wouldn’t even expect it.
Shield.
Samantha Kingston from Before I Fall. She’s got the team in mind and wants to keep them safe. Can antagonize the opposite team but willing to take the fall for the greater good.
Fighter.
Nemesis from The Diabolic. Did you read The Diabolic? Enough said.
Who’s on your Warcross team?
PREORDER 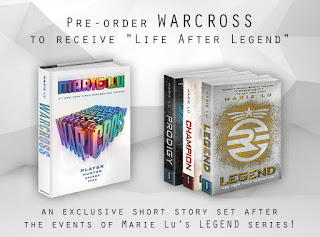 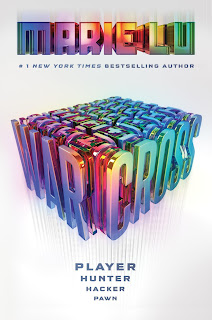 From #1 New York Times bestselling author Marie Lu—when a game called Warcross takes the world by storm, one girl hacks her way into its dangerous depths.
For the millions who log in every day, Warcross isn’t just a game—it’s a way of life. The obsession started ten years ago and its fan base now spans the globe, some eager to escape from reality and others hoping to make a profit. Struggling to make ends meet, teenage hacker Emika Chen works as a bounty hunter, tracking down players who bet on the game illegally. But the bounty hunting world is a competitive one, and survival has not been easy. Needing to make some quick cash, Emika takes a risk and hacks into the opening game of the international Warcross Championships—only to accidentally glitch herself into the action and become an overnight sensation.
Convinced she’s going to be arrested, Emika is shocked when instead she gets a call from the game’s creator, the elusive young billionaire Hideo Tanaka, with an irresistible offer. He needs a spy on the inside of this year’s tournament in order to uncover a security problem . . . and he wants Emika for the job. With no time to lose, Emika’s whisked off to Tokyo and thrust into a world of fame and fortune that she’s only dreamed of. But soon her investigation uncovers a sinister plot, with major consequences for the entire Warcross empire.
In this sci-fi thriller, #1 New York Times bestselling author Marie Lu conjures an immersive, exhilarating world where choosing who to trust may be the biggest gamble of all.
GIVEAWAY

NO PURCHASE NECESSARY. Enter between 12:00 AM Eastern Time on July 31th, 2017 and 12:00 AM on August 28, 2017. Open to residents of the fifty United States and the District of Columbia who are 13 and older. Winners will be selected at random on or about August 5, 2017. Odds of winning depend on number of eligible entries received. Void where prohibited or restricted by law.