Nancy has been a Kristin Cashore fan since meeting her in 2009 (WOW, right?) and is thrilled to have her join us in the Bay Area at the end of the month! Thank you for stopping by on our Tour Stop for JANE UNLIMITED by Kristin Cashore. We have partnered with Penguin Teen for this tour #PRHPartner and are so very excited. Having enjoyed her Graceling series, we are long time fans of Kristin and are ecstatic about her upcoming novel. It has been a few years since we last have had a novel of hers to read and so you can understand how momentous an occasion this truly is. So, please join us as we share our playlist for JANE, UNLIMITED. Make sure to enter in the giveaway posted at the end and visit the other stops on the tour. Good Luck! 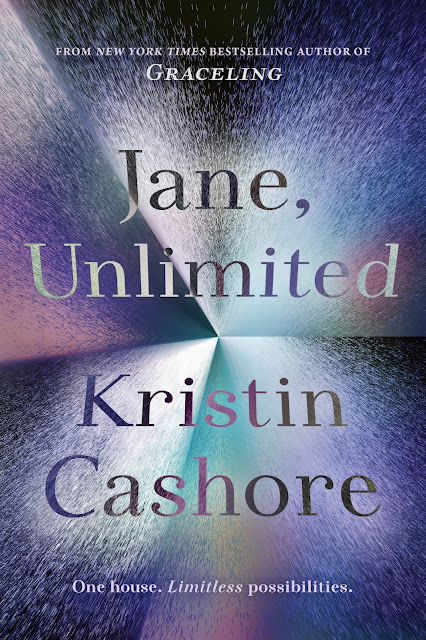 The highly anticipated standalone from the award-winning, New York Times bestselling author of the Graceling Realm series—a kaleidoscopic novel about grief, adventure, storytelling, and finding yourself in a world of seemingly infinite choices.
Jane has lived an ordinary life, raised by her aunt Magnolia—an adjunct professor and deep sea photographer. Jane counted on Magnolia to make the world feel expansive and to turn life into an adventure. But Aunt Magnolia was lost a few months ago in Antarctica on one of her expeditions.
Now, with no direction, a year out of high school, and obsessed with making umbrellas that look like her own dreams (but mostly just mourning her aunt), she is easily swept away by Kiran Thrash—a glamorous, capricious acquaintance who shows up and asks Jane to accompany her to a gala at her family’s island mansion called Tu Reviens.
Jane remembers her aunt telling her: “If anyone ever invites to you to Tu Reviens, promise me that you’ll go.” With nothing but a trunkful of umbrella parts to her name, Jane ventures out to the Thrash estate. Then her story takes a turn, or rather, five turns. What Jane doesn’t know is that Tu Reviens will offer her choices that can ultimately determine the course of her untethered life. But at Tu Reviens, every choice comes with a reward, or a price.
PLAYLIST for JANE, UNLIMITED

Kristin Cashore grew up in the northeast Pennsylvania countryside as the second of four daughters. She received a bachelor’s degree from Williams College and a master’s from the Center for the Study of Children’s Literature at Simmons College, and she has worked as a dog runner, a packer in a candy factory, an editorial assistant, a legal assistant, and a freelance writer. She has lived in many places (including Sydney, New York City, Boston, London, Austin, and Jacksonville, Florida), and she currently lives in the Boston area. Her epic fantasy novels set in the Graceling Realm–Graceling, Fire, and Bitterblue–have won many awards and much high praise, including picks as ALA Best Books for Young Adults, School Library Journal Best Book of the Year, Booklist Editors Choice, and Publishers Weekly Best Book of the Year. In addition, Graceling was shortlisted for the William C. Morris Debut Award and Fire is an Amelia Elizabeth Walden Book Award Winner.

NO PURCHASE NECESSARY. Enter between 12:00 AM Eastern Time on September 11, 2017 and 12:00 AM on October 9, 2017. Open to residents of the fifty United States and the District of Columbia who are 13 and older. Winners will be selected at random on or about October 11, 2017. Odds of winning depend on number of eligible entries received. Void where prohibited or restricted by law.