The minute I read about this book I knew I had to read it. Hockey, romance and second chances,  what more could my romantic heart wish for. Nothing! Because Sophia Henry has created a story that I am totally down with.
Breakaway features a story in alternating POVs (which I love) from the main characters of Bree and Luke and the romantic plot centers around Luke and Bree’s progressing romance as well as Luke and Bree seeking to find themselves again after life has knocked them around. Not to worry, although it sounds heavy it is a flirty and fun read.
BREAKAWAY has it’s moments, it’s ups and downs,  and there wasn’t a moment in which I wasn’t eager to know what would happen next and I was never disappointed. I  may not be able to play sports, but I adore a  good sports romance novel.  Fans of sports romances will be entertained by this book that I devoured in on sitting. It will keep you glued to your seat, forget about dinner read until the very last word is consumed. 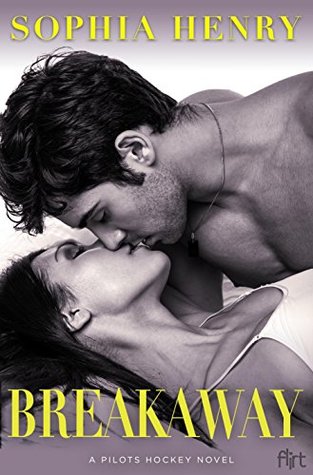 In a standalone hockey romance that tugs at readers’ heartstrings, a broken ex-pro learns to live and love again—all thanks to the complicated, wonderful nurse who gives him a second chance.
Brianna Collins needs to break away from her overbearing family. Her parents expect her to “fix” her brother after a series of concussions derailed his hockey career. Unfortunately, no doctor will give him clearance to play, and she’s finished with being the person they rely on to perform a miracle that will never happen. For Bree, a six-month nursing assignment at a hospital in Charlotte, North Carolina, is the perfect escape.
Luke Daniels, former forward for the NHL’s Charlotte Aviators, has spent close to a year rehabbing a career-threatening injury—and distracting himself however he can. Worlds collide when Luke realizes that the girl from his latest one-night-stand happens to be the new nurse at the hospital where he volunteers in the pediatric unit. What’s more, Bree’s the only person who makes him excited about life again.
Despite her initial reservations, Luke can’t help pursuing sweet, beautiful Bree. Then he realizes it was her brother whose career he ended with an accidental hit, and he falls back on the thing that’s always helped suppress his demons: alcohol. But if Luke doesn’t kick his old habits, he just may lose the one thing he loves more than hockey.
Don’t miss any of Sophia Henry’s exhilarating Pilots Hockey novels:
DELAYED PENALTY | POWER PLAY | INTERFERENCE | UNSPORTSMANLIKE CONDUCT | BREAKAWAY
Praise for Sophia Henry
“Sophia Henry’s hockey novels are fun and flirty, warm and sweet, with relatable heroines and swoon-worthy hockey heroes. They’ll bring a smile to your face and warmth to your heart.”—USA Today bestselling author Kelly Jamieson

Author Bio:
Award-Winning Author, Sophia Henry, is a proud Detroit native who fell in love with reading, writing and hockey all before she became a teenager. She did not, however, fall in love with snow. So after graduating with an English degree from Central Michigan University, she moved to the warmth of North Carolina for the remainder of her winters.
She spends her days writing books featuring hot, hockey-playing heroes. When she’s not writing, she’s chasing her two high-energy sons, watching her beloved Detroit Red Wings, and rocking out at concerts.