And Then There Were Four has one of the best covers, best premise, and best layout of story arc. See, this isn’t your usual thriller. This is a story of a group of teens who are being murdered…by their parents. And it’s told like a campfire story. Two perspectives, a little messy, but full of the thrill that you just won’t be able to put down. I couldn’t resist asking Nancy a few questions to try and get inside her head – These characters are just so fascinating!
Interview with Nancy Werlin
And Then There Were Four is written in two perspectives, one of which is written in second person. Tell us a bit about how you set up the story in such a way.
Originally I had grand dreams of having all the teen characters tell the story in sequence. But it got confusing fast, so I backed off to Caleb (told in second person), and Saralinda (told in first-person in a confiding, flowery, run-on sentence-y way).
I worked hard (years!) to find voices that felt unique to who Caleb and Saralinda are. Caleb is afraid of himself and dissociated from himself, because he fears his Evil Inner Twin. Saralinda has so many ideas in her head at every moment that she hasn’t got time for any more punctuation than is absolutely necessary – plus, she’s been so lonely, so she has those inner discussions with herself.
In finding their voices, I found their inner characters – and from that moment, AND THEN THERE WERE FOUR became a delight to write. Saralinda in particular is so much fun. I knew they were going to save themselves and their friends – no matter how much villainy I had thrown at them — if I just understood them well enough to let them do it.
So in the end, the details of working on the plot – particularly the end-game where they turn the tables on their murderous parents – came from understanding Caleb, Saralinda, and also Evan and Kenyon.
You’ve written in a wide variety of genres. What parts of writing a thriller most appeal to you?
I am a fan of the twisty, twisty plot, and of the over-the-top events possible in a suspense thriller. I think of it as hyper-realism. I try not to put in anything that is totally impossible, but I don’t mind unlikely. It’s interesting to think of a bizarre happenstance and then think: Okay, now what would they REALLY do if this happened? Then I write the scene and try to be real about it.
I am mindful, too, that evil people really exist. They can mess with you big-time. I’ve had experience with this. It makes me want to work it out on paper. Thrillers, like fantasy novels, let you talk about the big issue of evil and its presence in human life in a straightforward way that contemporary realistic fiction doesn’t allow.
There are some short videos about the plotting process for the book here: http://nancywerlin.com/videos/
Tell us about your research process for the various types of murders/attempted murders. How many FBI watch lists are you on now that you’ve killed so many characters?
Do you think all members of MWA (Mystery Writers of America) immediately go on an FBI Watch List? (Hey, plot idea. The lowliest FBI detective is put on punishment detail: keeping an eye on suspense writers, and then…)
Of course I did a lot of work about explosives, and how you can sabotage a car and so on.
The most difficult murder to figure out was the one with the poison. My character had to last a while, and then I needed the symptoms to be very specific. I did online research, but then consulted with Sarah Albee (check out her new book POISON – http://www.sarahalbeebooks.com/books/poison-deadly-deeds-perilous-professions-murderous-medicines/). Sarah saved what I think of as the “end-game” of AND THEN THERE WERE FOUR, which was very difficult to figure out.

So, we will be waiting for that book about MWA-ers who take their craft from fiction to fact ;). 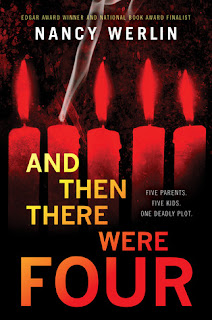 And Then There Were Four

by Nancy Werlin
Published: June 6th 2017
Publisher: Dial Books
Source: Publisher
Find It
An unlikely group of allies come together to save themselves when their parents seem to be plotting to have them all killed. Bestselling author Nancy Werlin returns to her YA suspense roots for this page-turner that’s sure to be much discussed.
Let’s not die today. Not even to make things easier for our parents.

Five very different students at a private high school are brought together under mysterious circumstances, and just barely escape a building collapse. Little by little they piece together the belief that their parents are working together to kill them all. Is it true, and if so how did the plan emerge and what are the parents’ motives? But most important, how can these teenagers save themselves? The urgency builds when one of the five dies and the others flee together. This unlikely group gradually bonds as they struggle to stay safe against all odds.

Nancy Werlin is a New York Times bestselling author. She received her B.A. from Yale, was named a Publishers Weekly Flying Start author for her first novel, and has since established herself as a writer of literary teen suspense. Her first suspense novel, The Killer’s Cousin, was an Edgar Award winner and was named by ALA as one of the top 100 YA novels of the past decade; Impossible is a New York Times Best Seller; and Extraordinary was chosen as a Top Ten Indie Next List pick and was named an Amazon Teens Top 10 for 2010. When not writing fiction, Nancy works part-time as a technical writer.

GIVEAWAY
WHO WANTS TO WIN 9 BOOKS? YOU DO. So enter at the link below!!!!