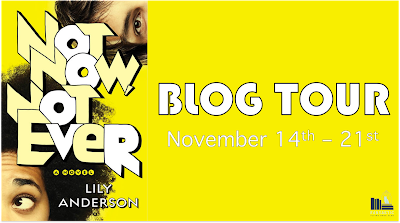 We are big, big fans of Lily Anderson, who we like to claim as our own since she’s a local author. We had the chance to formally meet her and the 2016 B-Fest and our admiration for her determination and voice has grown with each social engagement. Not Now, Not Ever has been on our TBR since the moment she told us there was a companion to The Only Thing Worse Than Me is You. Check out our interview with Lily below and be sure to pick up Not Now, Not Ever!
Interview with Lily Anderson
In Not Now, Not Ever, Elliot is taking charge and saying NO to the future established for her. What are some of the expectations you said no to when you were a teen? Were there any you wish you had said no to but didn’t?
OMG, between my mental illness and high IQ, I said no to basically everything as a teen. I left public school in the seventh grade and started homeschooling because I was too socially anxious to go to a junior high every day. Homeschooling was wonderful for me. I really thrived being able to set my own pace. So much so that I graduated two years early and went to community college because I didn’t know how to drive well enough to get to the nearest university. I have a lot of shoulda, woulda, couldas about my education—I did eventually go to a four year university but left after a minor nervous breakdown—but I know that I did the best I could with the situation at hand.
We love love love this cover! What parts of the story does the cover represent?
I am so over the moon about this cover! Lesley Worrell, the cover artist, did such an incredible job.
In what ways was writing Not Now, Not Ever different than writing your debut?
Ha! It was a thousand times harder. NOT NOW wasn’t the first book I wrote after I sold THE ONLY THING, but it was the first book that an editor was waiting for and the (self-imposed) pressure was kind of intense. I wrote THE ONLY THING before I had an agent or a career to think about, so I didn’t really worry about how long it took to draft. I even set it aside for a couple of months to work on other projects! NOT NOW was the opposite where I worked on it every day for almost a year, moderately haunted by reviews of THE ONLY THING. It was super hard, but it really taught me a lot about what being a professional writer was going to be like. You have to shut out the “what ifs” and get a story down on paper.
In your day time life, you’re a school librarian. How has that experience helped you as an author?
I spend all day talking about books, which is wonderful because that’s basically all I want to talk about anyway! My students are younger than my YA readers (my school only goes up to fifth grade), but they have strong literary opinions. Really, without my students I would never have thought to write novels that incorporate geek culture. My students are so passionate about the things they like—Star Wars, Harry Potter, Marvel, DC, Doctor Who—and that showed me that there was a place in literature for fandom. 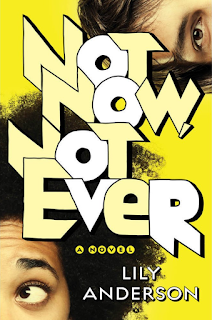 NOT NOW, NOT EVER
by Lily Anderson
Publisher: Wednesday Books
Published: November 21st, 2017
Find It

The sequel to The Only Thing Worse than Me Is You, inspired by The Importance of Being Earnest.
Elliot Gabaroche is very clear on what she isn’t going to do this summer.
1. She isn’t going to stay home in Sacramento, where she’d have to sit through her stepmother’s sixth community theater production of The Importance of Being Earnest.
2. She isn’t going to mock trial camp at UCLA.
3. And she certainly isn’t going to the Air Force summer program on her mother’s base in Colorado Springs. As cool as it would be to live-action-role-play Ender’s Game, Ellie’s seen three generations of her family go through USAF boot camp up close, and she knows that it’s much less Luke/Yoda/”feel the force,” and much more one hundred push-ups on three days of no sleep. And that just isn’t appealing, no matter how many Xenomorphs from Alien she’d be able to defeat afterwards.
What she is going to do is pack up her attitude, her favorite Octavia Butler novels, and her Jordans, and go to summer camp. Specifically, a cutthroat academic-decathlon-like competition for a full scholarship to Rayevich College, the only college with a Science Fiction Literature program. And she’s going to start over as Ever Lawrence, on her own terms, without the shadow of all her family’s expectations. Because why do what’s expected of you when you can fight other genius nerds to the death for a shot at the dream you’re sure your family will consider a complete waste of time?
This summer’s going to be great.
BOOK LINKS

Lily Anderson is a school librarian and Melvil Dewey fangirl with an ever-growing collection of musical theater tattoos and Harry Potter ephemera. She lives in Northern California, far from her mortal enemy: the snow.
FOLLOW THE TOUR