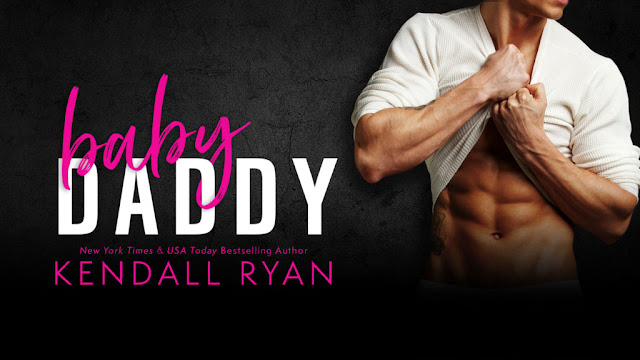 We are thrilled to bring you the cover for the brand new hot and hilarious standalone from New York Times bestseller Kendall Ryan.

We met in a trapped elevator.

Emmett was on his way to work, sophisticated and handsome in his tailored suit and tie. I was on my way to the sperm bank. Awkward, right? At thirty-five, my life hadn’t taken the path I thought it would and I was tired of waiting—I wanted a baby. And I was ready to take matters into my own hands to make it happen. After our ill-fated elevator encounter, Emmett insisted on taking me to dinner—he also insisted on something else—that I ditch my plan involving a turkey baster and let him do the job. He would be my baby daddy. He was a wealthy and powerful CEO with little interest in diapers or playdates. And since he didn’t want kids, I’d be on my own once his bun was in my oven, free to go my own way. But once his baby was inside me, it was like a switch had been flipped, and I got a whole lot more than I ever bargained for. This full-length standalone contains a hot, swoonworthy hero, lots of playful banter and some hot baby-making ! Enjoy.   ADD TO GOODREADS

A New York Times, Wall Street Journal, and USA Today bestselling author of more than two dozen titles, Kendall Ryan has sold over 1.5 million books and her books have been translated into several languages in countries around the world. She’s a traditionally published author with Simon & Schuster and Harper Collins UK, as well as an independently published author. Since she first began self-publishing in 2012, she’s appeared at #1 on Barnes & Noble and iBooks charts around the world. Her books have also appeared on the New York Times and USA Today bestseller lists more than three dozen times. Ryan has been featured in such publications as USA Today, Newsweek, and InTouch Magazine. Visit her at: www.kendallryanbooks.com for the latest book news, and fun extras Subscribe to Newletter Facebook | Twitter | Pinterest | Goodreads | Amazon Author Page
Add a Comment
Share