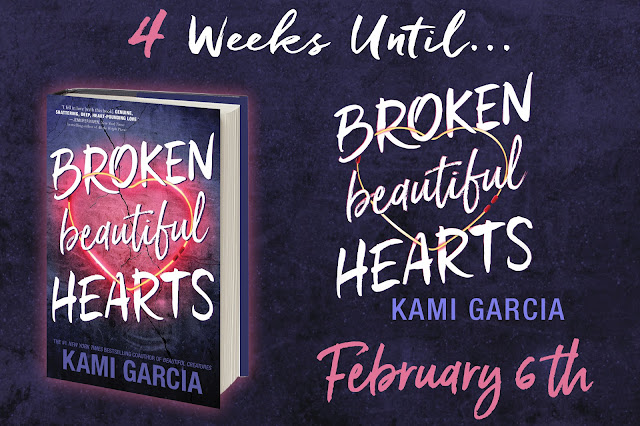 From the #1 New York Times bestselling coauthor of BEAUTIFUL CREATURES, comes BROKEN BEAUTIFUL HEARTS—a red-hot romance that will break your heart and put it back together again! Don’t miss this stunning new title from Kami Garcia!

From #1 New York Times–bestselling author Kami Garcia comes a red-hot romance that will break your heart and put it back together again.

Her heart has to break before it can open.

When star soccer player Peyton Rios receives an offer from her first-choice college, senior year starts off exactly as planned. But when Peyton uncovers her boyfriend’s dark secret, she confronts him—and finds herself falling down a flight of stairs. Peyton’s knee—and maybe her dream of going pro—is shattered. Everyone is talking: Was she pushed, or did she fall? Peyton knows the truth, even if no one believes her.

He has to let someone in before it’s too late.

With her future on the line, Peyton goes to stay with her uncle in a small Tennessee town to focus on her recovery. Dating is the last thing on her mind—until she meets sweet, sexy Owen Law.

But Peyton doesn’t trust her heart, especially when she senses that Owen is hiding something. When their secrets are finally exposed, Peyton has to decide if love is worth fighting for.

EXCERPT:
“Ever feel like you’re screwed no matter what you do?” Owen’s question comes out of nowhere.
All the time. Part of me wants to say it out loud. “Once in a while.” “Any advice?” He gives me a half smile.
I don’t know this guy, but he seems nice—and unhappy. I can relate.
He’s waiting for me to respond. I shrug. “Sometimes life only gives you two options. Bad or worse. So you go with bad.”
“Makes sense.” He studies me like he’s taking inventory, checking off boxes on a mental list. The competitor in me wonders how I’m scoring. What if I’m giving him advice about his girlfriend, possibly a delightful friend of April’s?
The faint sound of laughter from the party floats through the air.
“Why did you come to Black Water?” Owen asks. “I’m guessing itwasn’t for the social scene.”
I tap on my brace. “I tore my PCL, the ligament that runs behind my knee. My doctor said I’ll need a lot of physical therapy to get my knee back in shape, and I only have four months to do it.”
“What happens in four months?”
“I’m a soccer player. I need to get back on the field in March, when the season starts.”
“What if you need more time to recover?” It sounds like he actually cares about the answer.
“If I work hard enough, it will heal by then.” I hope.
Losing my spot at UNC isn’t an option. I practiced soccer drills with Dad every day after school and on weekends—and it paid off. I’m not letting Reed destroy my dreams.
“Don’t they have physical therapists where you’re from?” he asks.
“In Washington, DC? Sure.”
“You left Washington, DC, to come here? Why?” Owen is smart and nosy. Not the best combination when I’m trying to keep certain parts of my life private. But he does have an amazing smile.
“Why not?” I counter.
“How about because Washington, DC, is a major city with museums and concerts and the subway, and Black Water is . . . Black Water.”
“In DC, we call it the Metro, not the subway.”
He smiles at me again. “In Black Water we don’t call it anything, because we don’t have one.”
“That’s the point. There are no distractions here.”
“How did you hurt your knee?”
I didn’t.
“I fell down a flight of stairs.” It’s the truth, but for some reason leaving out the details makes me feel like I’m trapped in a room that’s too small and could get smaller any minute. “I’m a klutz when I’m not on the soccer field.”
“That sucks. I’m sorry.” Owen looks me in the eye and says it, like he really means it.
“It could be worse.” But with my scholarship hanging in the balance, it doesn’t feel that way.
“It still sucks.”
Why am I letting Owen ask me so many questions? I’ve known him for fifteen minutes. The incident with Reed taught me how easy it is to misjudge someone. I thought he was the kind of athlete who would never resort to doping and cheating.
I’ve always relied on my gut instincts about people—the little voice in the back of my head. But I don’t trust it anymore.
Owen cocks his head to the side and grins. “So do you still want to know if I have a girlfriend?”
Heat crawls up the back of my neck. “I never asked you that.”
“When I got off the phone, you asked if I was fighting with mygirlfriend.”
“I was making conversation, not fishing.” Okay, I sort of was. “I’m not hunting for a boyfriend if that’s what you think.”
“Your cousins made that pretty clear.”
I’m going to strangle those two. “What did they say?” So I know how much salt to dump in their breakfast tomorrow.
Owen leans back against the bales. “I saw them coming out of the locker room after the game and I mentioned that we met, and they said you don’t date.”
The Twins are dead.
They made it sound like I’m joining a convent after graduation. The heat spreads from my neck to my cheeks. I should ditch Owen and go back to the party before this conversation gets more embarrassing.
But I want to stay.
The last three weeks have been full of lies and accusations, surgery and doctors’ appointments, threats and depressing calls from an ex who won’t stop calling me and a best friend who never wants to speak to me again. My conversation with Owen makes me feel normal. It’s one of the few I’ve had in weeks that didn’t revolve around my injury or Reed.
I want it to last a little longer.
I also don’t want Owen thinking I’m convent-bound. “For the record, I do date. I’m just not interested in dating right now. There’s a difference.”
Owen holds up his hands in surrender. “I’m just telling you what I heard. Is that the reason you’re back here instead of hanging out at the party?”
“No. I’m just antisocial.”
His eyes flicker to my mouth. “I don’t believe that.”
I pull my hair back in a ponytail and secure it with the elastic around my wrist. Anything to keep from making eye contact with him. “You don’t even know me.”
Owen leans forward and rests his elbows on his knees. His arm grazes mine and he looks over at me. “Not yet.”
Add it to your Goodreads Now!

“Something wonderful happened to me as I read this—I fell in love. Genuine, shattering, deep, heart-pounding love. Thank you, Kami Garcia, for Peyton and Owen. We need their story.” —Jennifer Niven, New York Times bestselling author of All the Bright Places and Holding Up the Universe

About Kami Garcia:Kami Garcia is the #1 New York Times, USA Today & international bestselling coauthor of the Beautiful Creatures and Dangerous Creatures novels. BEAUTIFUL CREATURES has been published in 50 countries and translated in 39 languages, and the film Beautiful Creatures released in theaters in 2013, from Warner Brothers. Kami’s solo series, The Legion, includes the instant New York Times bestseller UNBREAKABLE, and the sequel UNMARKED, both of which were nominated for Bram Stoker Awards. Her other works include THE X-FILES ORIGINS: AGENT OF CHAOS and the YA contemporary novels THE LOVELY RECKLESS and the forthcoming BROKEN BEAUTIFUL HEARTS (February 2018). Kami was a teacher for seventeen years before co-authoring her first novel on a dare from seven of her students. If she isn’t busy watching Supernatural, Kami can teach you how to escape from a pair of handcuffs or bake a Coca-Cola cake. She lives in Maryland with her family, and their dogs Spike and Oz (named after characters from Buffy the Vampire Slayer). Visit Kami at www.KamiGarcia.com.