I participate in ongoing secret santa exchanges throughout the year, with one being around books. I’m a pretty hard person to shop for because I don’t keep every book in my collection on my TBR and my wishlist changes from day to day! You can imagine how thrilled I was when my secret santa not only picked a book I hadn’t heard of but also fit within the type of book I LOVE to read.
The past ruined. The present destroyed. The future erased.
So, first off…Thank you again, secret santa. You introduced me to a great series that I fell in love with. Not only did I devour it but I picked up the sequel (out next week) and am here to share both books with you today.
The Holo Series has a little something for everyone.
For those of you who love scifi, Consider was nominated for a Philip K. Dick Award (if you’ve been under a rock, you might know him from writing Man in the High Castle and many others!). It’s futuristic and tackles technology in a way I haven’t seen done before. I don’t want to give away how the world works but Kristy paints a clear picture as to what is going on. You’ll be fascinated and terrified at the same time.
“Okay, you need to feel your own sense of power. True power is standing in your own shoes, in your own truth, and not feeling ashamed but celebrating who you’ve been and who you’re becoming. When you speak from that place, people listen. When you listen from that place, the walls between us fall.”
For those of you who love kickass females, Alexa is your girl. She reminded me of Katniss, faced with an impossible decision and looked upon as a leader, even though she didn’t ask for that. Add to that Kristy’s portrayal of Alexa’s anxiety…You can imagine how this could go. Alexa does an amazing job managing everything that happens in both books.
There’s always a catch, always a cost. Keron swoops his robed arms around and holds his hands over his heart. If he has a heart. “We need your contribution in death.”
For those of you who love action, OH MAN, Contribute is the book for you. This book does not skip on the action scenes. Be forewarned: your favorite characters are in dire straights. Yes, you will be on the edge of your seat!
If you like tension, there’s a lot of it in Consider and Contribute. The people are faced with a decision that would crush even the strongest. Do they go through an unknown portal to a world sold as better or risk staying on Earth that is supposedly going to end?
INTERVIEW WITH KRISTY ACEVEDO

Tell us about your inspiration for the Holo Series. How did you form the idea behind the world and the power dynamics?
The Holo Series was inspired by Doctor Who, Star Trek, and modern dystopia. After binge-watching Doctor Who, I thought about what it would take in real life for people to leave with a stranger from the future, and BAM, I had the concept for the two-book series.
Some of favorite Star Trek characters are Data, Seven of Nine, and the Doctor from Voyager, so it was a natural bridge to think about how we would get to that level of holographic technology in our every day lives, and what it would take for people to want to be integrated with technology on an extreme level. I had to consider how we would function in a world where holograms could perform all jobs, and commerce is no longer required. One issue in a world like this is how economic class on Earth would affect each person’s opinion of Solbiluna-8, since there is no longer a class system at play. Alex, the main character, is blindsided by this. Some questions I had to ask: What happens when people are free from work? Is this utopia? Who leads a world like this? Do people believe hard truths in a utopia, or do they ignore them because life is good?
Alexandra is tackling some big issues in Contribute – She has to tell the people who thought they were going to paradise that everything they know is a lie. Bundle this with her anxiety and lack of access to medication and she’s in a precarious place as the potential leader of the resistance. Are there parts of yourself in Alex? What do you think you’d do if faced with the same challenge?
I had trouble motivating Alex in Book 2 because as a reader, I felt so bad for her. I wanted her to be able to quit and enjoy paradise, which is the exact opposite of the story’s point. Like Alex, though, if something is wrong on a fundamental level, if truth is being manipulated, I can’t sit back and stay passive.
Ironically, while writing Contribute, I was feeling completely overworked. I was editing book 1, writing book 2, and teaching high school English full-time with a family at home. All I could think about was how nice it would be to live in Solbiluna-8. That’s not good.
Now that the Holo Series is complete, what are you working on next?
I am writing a new YA project. Top secret. Highly classified. 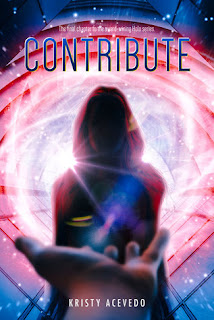 Contribute (Holo #2)
by Kristy Acevedo
Published: July 11th 2017
Publisher: Jolly Fish Press
Source: Publisher
Find It
The holograms lied to everyone on Earth and only Alexandra Lucas knows the truth. Now she’s trapped in the year 2359 without family or friends—worse, without her anxiety medication. Alex attempts to reconcile the marvelous scenery, technological advances, and luxurious living with the knowledge that the holograms weren’t being completely honest—what else are they lying about? With a secret that could shatter her society, Alex tries to find her place among strangers, convicts, and a rebellion striving to bring the holograms down. Alex struggles to find the best way to reveal the truth and reunite with those she loves. But when surrounded by beauty and every convenience, Alex wonders if truth becomes irrelevant in a perfect world. 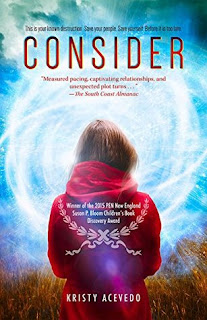 As if Alexandra Lucas’ anxiety disorder isn’t enough, mysterious holograms suddenly appear from the sky, heralding the end of the world. They bring an ultimatum: heed the warning and step through a portal-like vertex to safety, or stay and be destroyed by a comet they say is on a collision course with earth. How’s that for senior year stress?

The holograms, claiming to be humans from the future, bring the promise of safety. But without the ability to verify their story, Alex is forced to consider what is best for her friends, her family, and herself.

To stay or to go. A decision must be made.

With the deadline of the holograms’ prophecy fast approaching, Alex feels as though she is living on a ticking time bomb, until she discovers it is much, much worse.