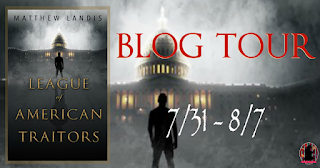 Anyone see Hamilton this summer? Nancy and I did and it was super fun – and sparked an interest in all things HAMILTON. So when we learned about Matthew Landis’ debut – Hamilton meets National Treasure – we were SO HERE FOR IT. We also learned that he is a history teacher (and taught in the same district as the lovely Tiffany Schmidt) and wanted to know how he pulled it off. Check out his guest post on his teaching style.

How I Teach and Why (I Think) It Works
1. I try to totally be myself
Kids can smell BS—their radar for it is pretty amazing—so if I’m up there faking interest in the subject matter or in them, it’s going to go bad. The beauty is, I love middle schoolers because they are hilarious and awkward and way more capable than most people give them credit for, and I love my subject matter equally. Putting those dual passions on display is, I think, the key to engaging the room. I really do believe I have the best job ever, and I hope that shines through.
2. Show, don’t (just) tell
Sort of like writing, you have to engage the audience by showing content matter rather than just talking about it. I remind my kids, “Yes, we will have to read in the content area for background knowledge” but the reading is only a means to an end, and that end should drive their understanding deeper. Ideally, they are getting to take part in the past in whatever way possible.
Here’s an example a coworker introduced me to: I’m teaching about the use of guerilla warfare during the American Revolution, and we’ve read all about Dan Morgan and his riflemen jacking up the British on their way to Saratoga. We even checked out some cool interactive maps and film clips. But to really get them hooked—to really drive deep in their minds how guerilla warfare set up Washington’s first major victory—they need to do it. So I bring in every heavy thing from my basement—luggage, paint cans, giant pieces of wood—and have half the class try and make it from Point A to Point B in the woods outside our school, while the other half hides in the brush and pelts them with nerf balls. Chaos ensues, and it’s epic. But more importantly, learning happens, big time.
3. I try to dispense buckets of grace
Kids are always going through stuff I don’t know about: home lives in a wreck, death in the family, sickness, or just the usual social misfit-ism of adolescence. So when Johnny Lazy doesn’t ever do anything for me, or Tough Bro Joe is mega confrontational and disrespectful, it’s not me that he has a problem with—or at least, I’m not the root cause. Maybe he/she is dealing with something heavy, something I’ve never been through, and maybe they’re having trouble coping. Or let’s say the student is straight up lazy: Getting mad and treating him/her as less-than isn’t going to motivate, at least not for long.
What kids often deserve is wrath, but what they need is grace. The slow, steady application of grace and accountability in the classroom shows students that you value them, but also that you aren’t going to let them get away with their crap. It’s a super hard line to walk, and I still really struggle with it; but like always, I learn from the kids, and always walk away amazed at the burdens they carry at such a young age. I cannot say this enough: I learn as much from my students about life as I hope they learn from me about the past. 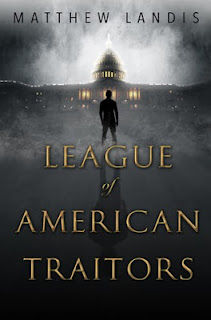 Those who don’t know history are destined to repeat it. . . .
When seventeen year-old Jasper is approached at the funeral of his deadbeat father by a man claiming to be an associate of his deceased parents, he’s thrust into a world of secrets tied to America’s history—and he’s right at the heart of it.
First, Jasper finds out he is the sole surviving descendant of Benedict Arnold, the most notorious traitor in American history. Then he learns that his father’s death was no accident. Jasper is at the center of a war that has been going on for centuries, in which the descendants of the heroes and traitors of the American Revolution still duel to the death for the sake of their honor.
His only hope to escape his dangerous fate on his eighteenth birthday? Take up the research his father was pursuing at the time of his death, to clear Arnold’s name.
Whisked off to a boarding school populated by other descendants of notorious American traitors, it’s a race to discover the truth. But if Jasper doesn’t find a way to uncover the evidence his father was hunting for, he may end up paying for the sins of his forefathers with his own life.
Like a mash-up of National Treasure and Hamilton, Matthew Landis’s debut spins the what-ifs of American history into a heart-pounding thriller steeped in conspiracy, clue hunting, and danger.

About Matthew Landis
I love history, but not in the old, awful, kill-me-now-please kind of way. My passion is convincing my students that the past is actually hilarious, shocking, tragic, disturbing, and altogether UN-boring. While getting my graduate degree in History at Villanova, I realized that there was yet one more way to do this: write contemporary young adult books laced with history to convince my students that past isn’t as awful as they think. That’s a huge reason why I wrote The Judas Society.
Some other stuff: I love poetry but don’t understand it; I want Gordon Ramsay to give me a fatherly hug at some point; I tend toward the unapologetically dramatic; and (to my great shame) I didn’t read the Harry Potter series until last year. I’m also really good at covering up patent insecurities with self-deprecating humor (like this joke).
FOLLOW THE TOUR