I dare you to pick up this book and be okay at the end. If you are, I’d like to talk to you about moving far, far away from me, you messed up person. 😵

That was when I decided that all the ghost stories got it wrong: evil isn’t a spirit or a monster or a ghost. It lives inside regular people, and it doesn’t know the difference between night and day.

Throughout this story, you’ll find yourself suspicious of everyone and rooting to figure out who is trying to screw over Kacey, who is new to town with more packed baggage than the average teen. I had myself wondering if the local legend was at play. I was half convinced that maybe the Winchester brothers were going to pop out and clean up some mean ghosties. But no, just your run of the mill HUMAN PSYCHOPATH. As to who it is, well, you’ll have to read to find out. Or listen, and be totally creeped out like I was.
I really love thrillers and I really love thrillers where you uncover these intense, mosaic teen relationships that remind you that girls are not all sugar and spice and everything nice. I like a little murder, too. I also like when they’re solved and you can go back and see the pieces you missed along the way. Little Monsters drops hints like The Sixth Sense and at the end you’re like OF COURSE…but wait, what?
I also love small towns and complicated family dynamics. I totally got a Stepford meets Cruel Intensions vibe along the way here. This book is dark and twisted and I am here for Kara dominating this market. 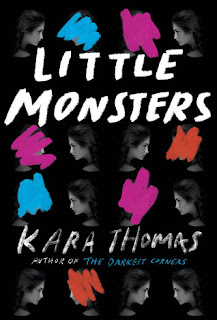 For fans of Pretty Little Liars, Little Monsters is a new psychological thriller, from the author of The Darkest Corners, about appearances versus reality and the power of manipulation amongst teenage girls.
Kacey is the new girl in Broken Falls. When she moved in with her father, she stepped into a brand-new life. A life with a stepbrother, a stepmother, and strangest of all, an adoring younger half sister.
Kacey’s new life is eerily charming compared with the wild highs and lows of the old one she lived with her volatile mother. And everyone is so nice in Broken Falls—she’s even been welcomed into a tight new circle of friends. Bailey and Jade invite her to do everything with them.
Which is why it’s so odd when they start acting distant. And when they don’t invite her to the biggest party of the year, it doesn’t exactly feel like an accident.
But Kacey will never be able to ask, because Bailey never makes it home from that party. Suddenly, Broken Falls doesn’t seem so welcoming after all—especially once everyone starts looking to the new girl for answers.
Kacey is about to learn some very important lessons: Sometimes appearances can be deceiving. Sometimes when you’re the new girl, you shouldn’t trust anyone.
Follow the Tour