Having read (and loved) Infinity last year, I was so hyped for Omega. All of the things I loved then – the characters, their chemistry, inter-dimensional travel, edge of your seat action – return in full force in Omega.

“All the versions of us have this crazy connection. He wasn’t in love with me—I was never in love with him—but it’s like we couldn’t help ourselves. That’s why he was so vehemently against anything ever happening between us. We were drawn to each other—like we are. But you didn’t have an Ashlyn where you come from, and I had a Noah. He might not have been my perfect Noah, but he was all I got and for as long as I live, I will be thankful for him. Your perfect Ash might be out there somewhere. If you don’t let me help you get your friends back, you’ll never have the chance to find her.”
Told in multiple points of view, Omega tells the story of Ashlyn and Noah while keeping Kori and Cade as secondary characters to the next phase in the Infinity series. Jus pulls back the layers on the onion as the story unveils itself, going deeper and deeper into how truly evil the creator of the Infinity project is.
If I said good point, then I was a heartless bastard willing to sacrifice an innocent girl to save his friends—and a liar. If I spoke the truth, that I would rather hack each of my toes off with a machete then tap dance through a vat of salt before letting her hand herself over to those bastards, then I was insane. One of those freaks who believed in love at first sight. Which I wasn’t. I was…what the hell was I?
I have to admit, the whole time I was reading, I felt a massive case of whiplash. There was so much going on all the time and I was constantly shocked by how deep some of the history of the project goes. The sci-fi elements work in tandem with the slow burn romance. Jus is a master at the zingers – sentences or short passages that leave you breathless. Again, if you love sci-fi books with character chemistry, I highly recommend this series!
We had the chance to chat with author Jus Accardo about Omega. Check it out!
Omega focuses on a different set of characters, though the main couple from book one are also present. What made you decide to write Omega focused on Ashlyn and Noah versus just continuing the story with the same main characters as Infinity?
I fell in love with Noah while writing Infinity. I really wanted the chance to dig deeper into his head. I also really wanted the chance to explore Dylan and his love for Ava and the deeper motivations he had for doing everything that he’d done.
Omega is told in two points of view. What was it like writing within two character’s heads?
I love writing duel POV books. I did it first with my Eternal Balance series (NA) and had so much fun. I think doing it that way, you get a unique perspective. The reader can see and feel more of what’s going on as opposed to having just one voice. It was easy to keep them separate because in my mind, they’re both such different people having come from insanely different backgrounds that shaped who they became.
You include some interesting pop culture references within the different world, such as Al Capone becoming president. Is there a specific would you would NOT want to live in if you were dimension hopping?
I would absolutely not want to live in a world where coffee didn’t exist. Or, where dogs were extinct. That would be a deal breaker for me.
How did you keep track of the world building rules as you wrote the story?
For Infinity, it was fairly easy. The story takes place on Kori’s world, which is the one we all live on. Cade and Noah and the cuffs had been burned into my brain for a long time. There was no forgetting any of it. As the series goes on, things do change, and that got a little hairy. For Omega and Alpha, I kept a notebook as I wrote. If anyone were to look at it, it would probably look like disorganized gibberish. But, to me, it’s a bible
Were there any characters whose actions surprised you?
I can’t say who it was, but I can say yes. There were several surprises. It was a character in book three. Book three was always a wild card. I knew who it was going to focus on, but the how of it was always up in the air. When I started writing it, things went a totally different way than expected—and I couldn’t be happier with the outcome! 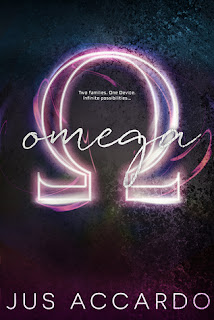 The second book in the Infinity time travel series is full of action, romance, and an intricately designed roller coaster plot.
One mistake can change everything. Ashlyn Calvert finds that out the hard way when a bad decision leads to the death of her best friend, Noah Anderson.
Only Noah isn’t really gone. Thanks to his parents’ company, the Infinity Division, there is a version of him skipping from one dimension to another, set on revenge for the death of his sister, Kori. When a chance encounter brings him face-to-face with Ash, he’s determined to resist the magnetic pull he’s felt for her time and time again. Because falling for Ash puts his mission—and their lives—in danger.
GIVEAWAY