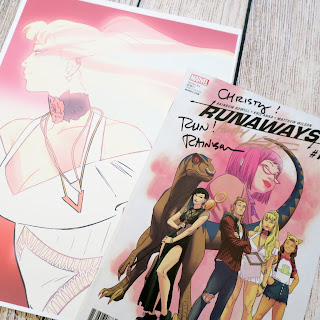 Our latest favorite thing is all of the interfacing between YA and comics. Admittedly, having teenagers front and center in comics isn’t a new things (Teen Titans, Young Avengers, the original run of Runaways…) but it IS awesome to see YA writers writing comics and graphic novels. So when dream-team Rainbow Rowell and Kris Anka announced they were rebooting Runaways together (just in time for the TV show – you know about this, right?), I was completely over the moon.
See, I already have Rainbow on my shelves and Kris on my walls. 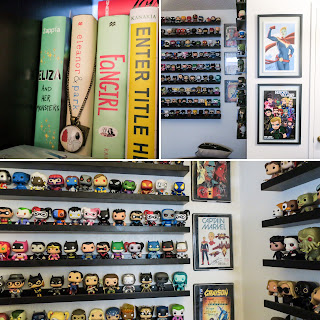 Since the announcement, I went back and binged the original series (first 7 volumes) by Brian K. Vaughan and Adrian Alphonse and LOVED it. I loved how you didn’t need to know anything about the Marvel universe to start because the runaways live in LA, away from the superhero world. I love how tangible the characters felt, how you likely knew people just like them in high school. I also like that they didn’t fit in boxes – Chase has a surfer bro look and attitude and yet you know there’s so much more under there. They worry about disappointing each other and are still struggling with reconciling the fact that their parents are part of an evil organization. Runaways is still one of the most original things Marvel has done. I only wish it hadn’t been canceled and brought back because there’s unexplored story.
This is where Runways #1 comes in, two years after the end of the series. Some of the characters have done other things in that time; Nico joined the A-Force (you should read this if you haven’t) and it’s clear Chase has been up to something. Issue 1 brings them back together right as Nico is examining her life choices.
Once you’re a Runaways fan, I dare you to read this issue without tears. I was flooded with emotion, brought on not only by the story but how Kris and Matt use expressions and color to tell it. There’s so much feeling without the need for a lot of words. This is do-or-die, literally, and Nico has had two more years of using spells (which are limited to one-time only) so her ability to get them out is tight. Even if you’re new to the series, you’ll CARE about these characters, giving you a reason to pine for issue 2. For those of you who are Rainbow fans out there, this will feel familiar.
Without wanting to giveaway anything else, I leave you with some tweets from Rainbow’s launch in Omaha and a recap of Kris’ launch here, which I had the pleasure of attending yesterday. I also picked up a signed (by Kris) copy of issue 1, which you can enter to win below. PLEASE subscribe to this series – in store, online, get a mail subscription, whatever. Sales will drive a series and if the sales aren’t good, we won’t have more. And we need more! 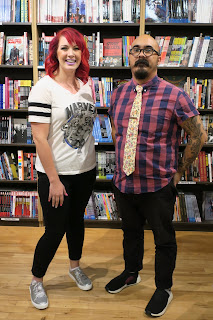 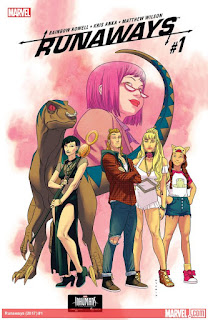 Writer: Rainbow Rowell
Penciler: Kris Anka
GET READY TO RUN! The “IT” book of the early 2000s with the original cast is back – Nico! Karolina! Molly! Chase! Old Lace! And, could it be? GERT?! The heart of the Runaways died years ago, but you won’t believe how she returns! Superstar author Rainbow Rowell (Eleanor & Park, Carry On) makes her Marvel debut with fan-favorite artist Kris Anka (ALL-NEW X-MEN, CAPTAIN MARVEL) in the series that will shock you and break your heart!
GIVEAWAY