When we first learned of Feral Youth, a collection of stories retold Canterbury Tales style, we couldn’t wait to get our hands on it. Shaun’s enthusiasm alone is enough to make you want to read it and then you see this AMAZING diverse group of authors who contributed and it’s like 😍.
Shaun David Hutchinson, Brandy Colbert, Suzanne Young, Tim Floreen,  Justina Ireland, Alaya Dawn Johnson, Stephanie Kuehn, E.C. Myers, Marieke Nijkamp, Robin Talley

See what I mean? Feral Youth is more than a collection of stories. As the stories unfold, you’ll see that they unveil little morsels of each character in the larger story arc and the ending is just so good. Each of these stories is wrapped within a bigger story (fascinating process, as you’ll see below) and each story is so uniquely the author’s that long time fans will have a treat and new fans will get a peek into that author’s work. It’s hard to pick a favorite because they’re each so different. I really loved E.C. Myer’s two-part story and am pretty sure I will never sleep again. His work is so provocative and completely terrifies me. Tim Floreen’s story was so engaging that I couldn’t stop my audiobook before I finished it. Suzanne Young’s story was all too real.

What I am really saying is you need to read it. If you don’t get completely sucked in, I’ll be shocked.

Each story is so uniquely each author’s writing. As a fan of many of the authors, I could see pieces of them in their work. Talk about the collaborative process to keep the intent of the story on track.

With Feral Youth, we worked at the beginning to build the characters for the frame story. Each author developed a character with a background that I could work with. Then I told them to go wild. The only thing I asked of them was that the story should reveal something about their character. The stories could be about their frame character or not at all. They could be any genre, any style. If the story was about their frame story character, the story didn’t have to be true. Just, I wanted the authors to have as much flexibility as possible to craft a story that spoke to them and who their character was. To that end, I waited until after they’d turned in their stories before I wrote the frame story so that I could work the themes of their stories into their character’s interactions. It was more work, but I think working the frame around the stories rather than trying to force the stories to work in the context of the frame made the whole thing feel more authentic and organic.
More than an anthology, Feral Youth is a true weaving of 10 authors within a larger story of being trapped in the wilderness (which we already know is a bad idea from Stephanie). What was it like to weave the stories together?
Scary? I mean, I had a basic outline of what challenges the group would face during the wilderness hike, but no idea how the stories would inform their interactions until I actually read all of them. There was this moment when I sat down with all the stories to really write the frame and I thought, “Oh crap. I have no idea what I’m doing.” But, you know, I think the strength of the writing in every single story, and the diversity and strength of the characters they created, ended up making my job incredibly easy. Once I started writing these characters (and I have to honestly thank every one of the authors for trusting me enough to write characters they’d created!), the story just flowed so naturally. I could have easily tripled the length of the frame story because the authors gave me such complex, amazing characters to work with.
What other classics turned contemporary YA pairings would you recommend? What still needs to be retold?
I’d love to see a really amazing Beowulf retelling. It’s another story I’m a sucker for. I’d also like to see these retellings done in unusual ways. I’d love to see a writer retell Romeo and Juliet and acknowledge how messed up and creepy and not romantic it is that a twenty-something man convinces a thirteen-year-old girl to sleep with him, and ultimately kill herself. More than anything, I’d love to see fresh and honest takes on American literature. Like, imagine Justina Ireland retelling The Crucible. Imagine Tim Floreen retelling Moby Dick. Alaya Dawn Johnson tackling The Great Gatsby. Classic American literature is incredibly lopsided and the narrative it weaves about who shaped the nation is a flat-out lie. So I think it would be wonderfully interesting to see diverse authors deconstruct that lie and retell some of those stories. 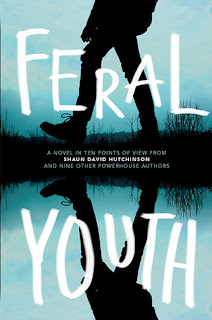 At Zeppelin Bend, an outdoor education program designed to teach troubled youth the value of hard work, cooperation, and compassion, ten teens are left alone in the wild. The teens are a diverse group who come from all walks of life, and they were all sent to Zeppelin Bend as a last chance to get them to turn their lives around. They’ve just spent nearly two weeks learning to survive in the wilderness, and now their instructors have dropped them off eighteen miles from camp with no food, no water, and only their packs, and they’ll have to struggle to overcome their vast differences if they hope to survive.
Inspired by The Canterbury Tales, Feral Youth features characters, each complex and damaged in their own ways, who are enticed to tell a story (or two) with the promise of a cash prize. The stories range from noir-inspired revenge tales to mythological stories of fierce heroines and angry gods. And while few of the stories are claimed to be based in truth, they ultimately reveal more about the teller than the truth ever could.
Add a Comment
Share