“Forget true love’s kiss to break a spell, or slaying a dragon to rescue the princess; Ringle employs familiar fairy tale tropes but turns them on their heads to deliver something wholly unexpected and fresh.” — Publishers Weekly
Q & A with Molly Ringle
The Goblins of Bellwater

How closely did you follow Christina Rosetti’s poem “Goblin Market” as a basis for the story?
I call this a book “inspired by” Rosetti’s poem rather than saying it’s “based upon” it, because I did veer from the poem a significant amount. I first read the poem a few years ago, and it intrigued me deeply. It’s evocative and strange, and, like a fairy tale, has many symbols and events that could be interpreted as having several different meanings. My assignment to myself was to use it as a jumping-off point for a modern paranormal novel, which would then go its own way as the plot required. What I kept from the poem was the basic surface framework: we have a pair of sisters, grown but on the young side, one of whom becomes enchanted by eating goblin fruit in the forest and begins walking away as a result, alarming the other sister into seeking a way to save her. Since Rosetti’s poem ends with a fast-forward to the women being “wives” and telling their children about their adventures, and since I wanted to write a paranormal romance anyway, I gave my modern sister characters a pair of men to get involved with, in a double love story with eerie angles that I think match the eeriness of the original poem. Mind you, another interpretation of the poem is that the two women aren’t really sisters but lovers, which would be a different route to take and which I think would be lovely to see too!
What is the significance of the four elements (Earth, Air, Fire, Water) in this story?
The four elements are common fixtures in many ancient cultures, and have remained popular into the modern day. One of my favorite TV shows is Avatar: the Last Airbender, which uses the four-element framework brilliantly in its world-building. In reading up on faery lore for this book, I found that scholars oMen classify types of fae under the four elements, and since that appealed to me, I did the same. As one of the characters in The Goblins of Bellwater muses, there’s something human and emotionally real about looking at nature that way, even if we technically know, thanks to science, that nature contains far more than four elements. And in my novel, the only way to break the goblin spells involves respecting and trusting each of the four elements, even when they’re at their most daunting.
What kind of magic system does this book involve?
In this book, my main characters are ordinary humans who can’t do any magic, but they become involved in the dealings of the fae realm, which is a bit like another dimension. It can be entered or glimpsed by summoning the fae (which includes goblins), who might or might not answer you. But you’re luckier on the whole if they don’t, because many of them are treacherous, and the realm itself is a wilderness containing many uncanny dangers. From the point of view of the human characters, the magical rules and the cultural norms of the fae are nonsensical, almost inexplicable, but since some of these people have fallen under curses, they have to step in among those dangers and work with the rules as best as they can anyway.
What are the most magical places you’ve been to in real life?
Puget Sound and its surrounding forests and mountains—which is why I chose the area for the enchanted lands in The Goblins of Bellwater. Also some of the forests and meadows in the Willamette Valley in Oregon, where I grew up. Oregon and Washington are both overflowing with natural beauty and I’m spoiled to have spent most of my life here. In addition, some places in Great Britain have felt quite magical to me, such as Tomnahurich (Hill of the Fairies) in Inverness, Scotland; or Old Town Edinburgh with its many close alleys and dark medieval buildings and brick-paved streets; or Westminster Abbey, not only because of its beauty and its many graves of astoundingly famous historical figures, but because when I first visited it as a 19-year-old, I’d never been in any building anywhere near that old before (having grown up in the Pacific Northwest), and it blew my mind. 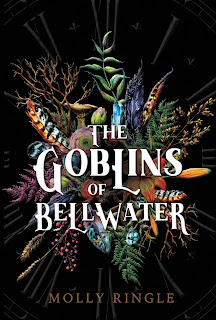 The Goblins of Bellwater
by Molly Ringle

Most people have no idea goblins live in the woods around the small town of Bellwater, Washington. But some are about to find out.

Skye, a young barista and artist, falls victim to a goblin curse in the forest one winter night, rendering her depressed and silenced, unable to speak of what happened. Her older sister, Livy, is at wit’s end trying to understand what’s wrong with her. Local mechanic Kit would know, but he doesn’t talk of such things: he’s the human liaison for the goblin tribe, a job he keeps secret and never wanted, thrust on him by an ancient family contract.

Unaware of what’s happened to Skye, Kit starts dating Livy, trying to keep it casual to protect her from the attention of the goblins. Meanwhile, unbeknownst to Kit, Skye draws his cousin Grady into the spell through an enchanted kiss in the woods, dooming Grady and Skye both to become goblins and disappear from humankind forever.

It’s a midwinter night’s enchantment as Livy, the only one untainted by a spell, sets out to save them on a dangerous magical path of her own.