Thank you for joining us today on our Blog Tour Stop for THINGS I’M SEEING WITHOUT YOU by Peter Bognanni. Please make sure to check out our interview and don’t forget to enter the giveaway at the end of the post. Good Luck!
Interview with Peter Bognanni
Author of Things I’m Seeing Without You
The premise for your story is unique while also touching on a difficult subject, what was the inspiration for your novel?
There isn’t always an autobiographical element to what I write, but this time around there was. A few years ago, someone that I only knew online committed suicide, and for a long time, I didn’t really know how to think about it. I certainly felt sad, but I had also never met her in person. I wasn’t sure if I really knew her. She never spoke about her mental illness on social media, so I had no idea it was a part of her life. Eventually, I felt like I needed a way to think through all of this, so I ended up starting a book about it. It took me a long time to figure out the right way to approach the subject.
What was your hardest scene to write?
Main my character, Tess, hides behind a thick shield of irony and sarcasm. It can be tough to get her to say what she truly believes. Without giving too much away, I’d say the final funeral of the book is the one that was toughest to get down. Tess has to drop her act and be completely honest. By the time I wrote that scene, I had I gotten so used to writing her a certain way, and I had to break some walls down too.
Is there a message in your novel that you hope readers will grasp?
There are certainly some things I want to get across on a basic level: that there is no right way to grieve, that rituals can be re-invented, and that we shouldn’t be silent about suffering from mental illness. But, on a larger level, I hope I get readers asking themselves questions about some of the bigger questions the book takes on. How well do we know our online friends? How do you find love again after a loss? And what role do funerals play in the grieving process? So, I guess there are about 10 messages.
What is your writing kryptonite?
It used to be the Internet. Just pretty much everything on the Internet. Now it’s my two-year-old son. He’s more fun than the Internet, but more demanding of my attention.
How is writing this novel different than your first novel The House of Tomorrow?
This book was harder, maybe in part because it was my second. I didn’t really know what I was doing the first time around, and there’s a kind of freedom in that. This time, I was trying to hit a difficult balance of humor and sadness, and it took a lot of drafts to get it right. I also realized late in the game that it was definitely going to be a YA book, so then I started thinking about what that audience might really need or want from a story like this. The combination of the difficult content with the desire to write for a new audience was a tough but rewarding one.
Do you try to be more original or to deliver to readers what they want?
That’s a good question. I think it comes down to a balance. I always tell my students that writing is not just a self-indulgent thing you do for yourself; it’s an act of communication with the reader. But, you also can’t write to please everybody. It’s impossible. So, at the end of the day, you try your best to make the reading experience a good one, but you can’t veer too far from your vision of the book. That originality is at the root of what makes your work your own.
How did publishing your first book change your process of writing?
Honestly, it kind of tripped me up for awhile. It’s a strange experience to see something that has been so internal for years find it’s way into the world. Suddenly you’re hit with reviews, reader responses, and sales numbers. It can feel very far from the original act of sitting down and working on a piece of art. It took me a few years to be able to clear my head enough to get back to sitting in a chair creating again. Believe me, I’m very happy it was published—I want readers for my work—but it’s a different world after the first one. You can never really go back.
Can you tell us about your future writing projects?
I’m working on my second YA book right. All I’ll say is that it’s about a bunch of misfits trying to save their neighborhood movie theater, though there’s a little more to it than that. As a long time film geek, I’m having a lot of fun with the film references. Also, my first book, The House of Tomorrow, was recently turned into a movie with a fantastic cast, and it’s playing at film festivals right now! I’ve already been to a few and it has me thinking more than ever before about trying to write something for the screen. We’ll see if it actually happens. I’m sure my son would rather play with trains. 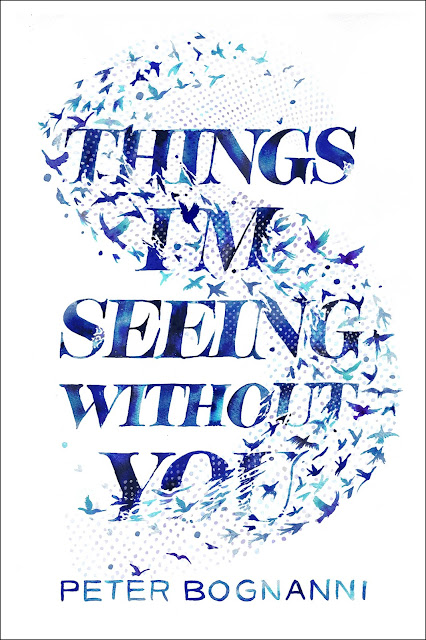 Seventeen-year-old Tess Fowler has just dropped out of high school. She can barely function after learning of Jonah’s death. Jonah, the boy she’d traded banter with over texts and heartfelt e-mails.
Jonah, the first boy she’d told she loved and the first boy to say it back.
Jonah, the boy whose suicide she never saw coming.
Tess continues to write to Jonah, as a way of processing her grief and confusion. But for now she finds solace in perhaps the unlikeliest of ways: by helping her father with his new alternative funeral business, where his biggest client is . . . a prized racehorse?
As Tess’s involvement in her father’s business grows, both find comfort in the clients they serve and in each other. But love, loss, and life are so much more complicated than Tess ever thought. Especially after she receives a message that turns her life upside down.
Funny, heartbreaking, hopeful, and wondrous, in the vein of Six Feet Under and I’ll Give You the Sun, Things I’m Seeing Without You is a beautiful examination of what it means to love someone, to lose someone, and to love again.

Peter Bognanni is a graduate of the Iowa Writers’ Workshop. His debut novel, The House of Tomorrow, won the LA Times award for first fiction and the ALA Alex Award and has been adapted into a feature film. He teaches creative writing at Macalester College in Saint Paul, Minnesota.
GIVEAWAY

NO PURCHASE NECESSARY. Enter between 12:00 AM Eastern Time on September 25, 2017 and 12:00 AM on October 16, 2017. Open to residents of the fifty United States and the District of Columbia who are 13 and older. Winners will be selected at random on or about October 18, 2017. Odds of winning depend on number of eligible entries received. Void where prohibited or restricted by law.