AUTONOMOUS combines social media stakes with jaw-dropping, high-tech action for a road trip saga like no other. The Fast and the Furious meets Stephen King’s Christine in this YA novel about a group of friends and a cutting-edge driverless car (OTTO) that taps into their online profiles, unlocking deep secrets that put the entire group in danger.
Every kilobyte of this group’s digital history is used to entertain (or threaten) them. AUTONOMOUS speaks to the dangers of too much information on social media, and the hype over driverless cars now entering the marketplace.

Interview with Andy Marino
Autonomous deals with many concerning issues: sex, recreational drug use and suicide. What made you decide to tackle these issues?
Two main reasons. One: it seemed dishonest to write about seventeen/eighteen-year-olds without dealing with real issues kids face at that age. It was my goal to let those things bubble to the surface without getting preachy, heavy-handed, or impossibly dark.
Two: from a plot standpoint, I wanted the novel to be structured around an escalating series of incidents. There’s the external—the ups and downs of the road trip itself—and the internal—the issues the characters face, and how those issues force personalities to clash in funny and awkward ways.
What research went into writing Autonomous?
I watched TED talks by driverless car engineers to learn how the cars use LIDAR (basically, radar imaging) to “see” the road and the world around them. We don’t really think about it because driving is second nature, but we’re processing countless pieces of information every time we drive even five minutes to the store. It’s amazing to see that mapped out.
I also read a few academic papers on the possible ways a driverless car might be hacked, which is a pretty crazy rabbit hole to go down. I wanted to learn just enough to be able to put my own spin on the technology, so it could serve the story without getting boring.
In this book there is a dream car that can do anything and take you anywhere. Is it the car of your dreams?
No, for the simple reason that I like driving! Even if autonomous vehicles become the norm someday, I don’t think human beings will ever abandon manual driving altogether. There is something great about putting on music and hitting the road, and I don’t think it’s the same experience if you’re just kind of sitting there.
I liked the idea of what our future might hold and the technical advances that occur within your novel. What do you hope carries over into the real world?
I want artificial intelligence to evolve exponentially, so it’s basically indistinguishable from humans. That would obviously be terrifying—there’s a reason it’s the basis for every sci-fi cautionary tale ever—but I can’t pretend like it wouldn’t also be awesome. Maybe just for a minute or two.
What is your favorite book as a teen and why?
I loved Redwall by Brian Jacques, along with many of the books that followed in that series. I read mostly fantasy when I was growing up, so I also have to give credit to Lord of the Rings for capturing my imagination.
How can readers discover more about you and you work?
Website: andy-marino.com
Twitter: andy_marino
Instagram: andyjmarino 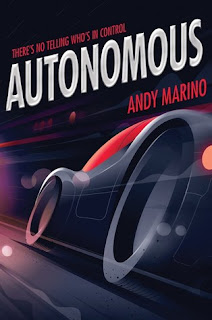 by Andy Marino
Publisher: Freeform
Published: April 3, 2018
William Mackler is about to go on the road trip of a lifetime. After winning a contest—and nearly dying in the process—he becomes the proud owner of Autonomous, a driverless car that knows where you want to go before you do. #Worthit! To sweeten the deal he gets to pick three friends to go with him on a cross-country trip. For William, a reckless adrenaline junkie, this is the perfect last hurrah before he and his friends go their separate ways after graduation. But Autonomous is more than just a car without a steering wheel. It’s capable of downloading all of the passengers’ digital history—from the good, to the bad, to the humiliating. The information is customized into an itinerary that will expose a few well-kept secrets, but it will also force William to face some inner demons of his own. Think you know Autonomous? The real question is, how much does Autonomous know about you? This funny, tense, action-packed thriller combines topical social-media-privacy stakes with jaw-dropping high-tech action for a road trip saga like no other.
Add a Comment
Share