David, Nancy & Christy’s Strange Fascinations
David Arnold’s Strange Fascination
There are various commonalities among Noah’s Strange Fascinations: they’re constant, even when everything else changes; they’re a bit niche, not something everyone knows about; they each have an element of mystery, something Noah senses in or about them that no one else does, but something he can’t quite put his finger on; and, in a way, the more he learns about each Strange Fascination, the more he learns about himself.
By that definition, I suppose my Strange Fascination would be Elliott Smith.
I first discovered Elliott’s music when I heard it in the movie Good Will Hunting. (To this day it bugs me that I wasn’t “an early fan,” that I caught on in such a generic way, but in the immortal words of Sam Seaborn, I choose to forget the fact that I came a little late to the party and embrace the fact that I showed up at all.) There’s this scene in the movie where the main character is saying goodbye on the phone to his girlfriend (presumably, for good) and she says, “I love you,” and he says, “Take care,” and… cue Elliott. His voice comes in quietly, as always, vulnerable, as always, and suddenly the scene is real magic. It is, in my opinion, the greatest needledrop in the history of film soundtracks.
It’s probably for the best that my introduction to his music was in a scene where one person lays it all on the line, and the other offers nothing but a glib, “Take care.” Ask anyone who knows his music to describe it in one word and probably 80% of them would answer with some variation of the word “sad.” No one, in my opinion, has ever found such fertile soil in such painful moments as Elliott Smith. But that’s what made him great: his ability to articulate—not just lyrically, but melodically, and in the very tone of his voice—your own hurt. Listening to Elliott is a deeply empathetic experience. But it’s symbiotic empathy. You feel his pain; he feels yours. And where others might sing sad songs, Elliott’s voice climbs down into the pit with you so you’re not alone. It’s no wonder the people who love Elliott’s music feel that their love extends to Elliott himself: it’s a rare friend who willingly and lovingly keeps you company in your lowest moments. Elliott did that. His music still does.
I never got to meet Elliott Smith (who died under suspicious circumstances in 2003). I’ve read many accounts from those who knew him. I’ve watched the documentaries, read the biographies, listened to the podcasts, trolled the interwebs, and even explored some of his old haunts on a work trip to Portland. I hear he liked to dance. I hear he was kind and generous to strangers. I hear he liked ice cream. I really would have liked to meet the guy. Maybe I can someday, who knows. In the meantime, I’ll remember what he taught me—that an honest voice is more compelling than a pretty one—and I’ll keep extending my love of Elliott’s music to Elliott himself. The guy climbed down into my pit, it’s the least I can do.

Nancy’s Strange Fascination
I am fascinated by many things but I would think the strangest is my obsession with graveyards. Yes, you read it correctly, graveyards. Everytime I travel to a new city I want to learn about it’s deceased population and their final resting place, famous burial plots and beautiful head stones. I usually take a docent tour of the cemetery (if available) then I spend time walking around taking pictures and inspecting the tombstones. Many may think its morbid, but I find it to be comforting. My bucket list includes visiting the Recoleta in Buenos Aires and the Monumental cemetery in Milan.
Christy’s Strange Fascination

I feel like most things I have an interest in become fascinations – I get so dang engaged with whatever I am currently passionate about (which is itself a little strange). Picking just one was hard!

I am strangely fascinated with….

Women who kill their husbands.

That’s right, I am totally a huge fan of SNAPPED. I actually love all true crime related stuff. Maybe this is why I love thrillers so much?

Sound off in the comments – what are you weirdly fascinated with? 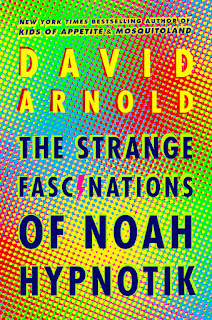 THE STRANGE FASCINATIONS OF NOAH HYPNOTIK
by David Arnold
Published: MAY 22, 2018
Publisher: Viking/Penguin

Find It
No matter how organized I get my room, my records, my books, no matter how precisely I communicate a thing, or how many arrows point to how many objects, in the end I’m floating through space in a most peculiar way.
This is Noah Oakman → sixteen, Bowie believer, concise historian, disillusioned swimmer, son, brother, friend.
Then Noah → gets hypnotized.
Now Noah → sees changes: his mother has a scar on her face that wasn’t there before; his old dog, who once walked with a limp, is suddenly lithe; his best friend, a lifelong DC Comics disciple, now rotates in the Marvel universe. Subtle behaviors, bits of history, plans for the future—everything in Noah’s world has been rewritten. Everything except his Strange Fascinations…
A stunning, surrealist portrait, The Strange Fascinations of Noah Hypnotik is a story about all the ways we hurt our friends without knowing it, and all the ways they stick around to save us.
FOLLOW THE TOUR
WEEK ONE
May 7 – The Blonde Bookworm – Review
May 8 – Confessions of a YA Reader – Review + My Strange Fascinations
May 9 – Forever Bookish – Review
May 10 – Rants and Raves of a Bibliophile – Playlist with Graphic Quotes
May 11 – Adventures in YA Publishing – Author Q&A
WEEK TWO
May 14 – The Nerdy Girl Express – Review
May 15 – A Court of Coffee and Books – Review + Graphic Quotes
May 16 – BookCrushin – Review + Playlist
May 17 – Mind of a Book Dragon – Review
May 18 – Tales of the Ravenous Reader – Author Guest Post:  What Would Your Strange Fascination Be?
WEEK THREE
May 21 – Pop! Goes the Reader – Wallpaper
May 22 – The Young Folks – Author Q&A
May 23 – Page Travels – Creative Instagram
May 24 – Bookfoolery – Review
May 25 – Dazzled by Books – Candle Creation Post + Review
WEEK FOUR
May 28 – Paper Trail YA – Author Q&A
May 29 – Snowandbooks – Review + Aesthetic Board
May 30 – Reading Writing and Me – Book Review
May 31 – The Radiant Reader – Playlist + Creative Instagram Picture
June 1 – We Live and Breathe Books – Review + Moodboard
Add a Comment
Share