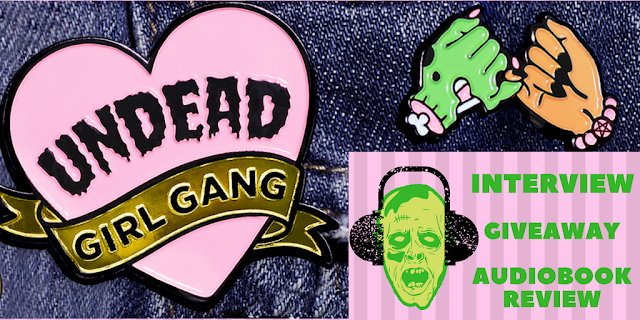 Today on Tales of the Ravenous Reader I have the pleasure of interviewing local author Lily Anderson. I can’t believe that I have been reading her books for years and that she is probably one of the authors that lives closest to me and yet I have never interviewed her. I think she is wicked cool and she just wrote a book you might have heard of, UNDEAD GIRL GANG and it features a Latina Wiccan and some undead ladies that will leave you howling with laughter and cheering them on with it’s strong theme of female empowerment. Have you read it yet? Or even listened to it? If not then you really need to because you will not be disappointed.

I had the pleasure of reading UNDEAD GIRL GANG earlier this year but when the opportunity came to listen to it. I could not resist and I am so glad that I did for it was like experiencing a whole new book and I enjoyed it so much more.

My love for all things Wiccan and Feminism increased by the power of three with this novel. The storyline was relatable, the dialogue witty and sharp and  the relationships between all the characters provided the right amount of “life” to keep me engaged. I especially enjoyed Mila’s inner monologue that would leave me in tears from laughter and I enjoyed how she was portrayed as a tough girl with a gooey center. She had heart and she cared about her best friend, enough to bring her back from the dead to find out what happened to her because she could not fathom her BFF taking her own life. Yet, with all things magical there can be a bit of problem and what story would we have without some issues? This is where the story gets quite interesting because not only does Mila bring back her friend but she also brings back to enemies and if you think this story isn’t twisted enough. You ain’t seen nothing yet.

It is through this temporary arrangement that these ladies from an unusual bond and that they are able to reach an understanding in sisterhood that you cannot help but admire. I found myself rooting more Mila and my Latina pride swelled up as she took charge and was able to exceed her expectations and become more than she ever thought she could be.

I recommend listening to the audio that is so fantastically narrated by Rebecca Solar. She brings a fresh sound to this story and makes you feel what these characters are going though so well. If you have the chance I say take it and listen to it.

UNDEAD GIRL GANG
Lily Anderson
(RAZORBILL BOOKS, MAY 8, 2018)
AMAZON | BARNES AND NOBLE | INDIE BOUND
LISTENING LIBRARY | AUDIBLE | ITUNES
Mila Flores and her best friend Riley have always been inseparable. There’s not much excitement in their small town of Cross Creek, so Mila and Riley make their own fun, devoting most of their time to Riley’s favorite activity: amateur witchcraft.
So when Riley and two Fairmont Academy mean girls die under suspicious circumstances, Mila refuses to believe everyone’s explanation that her BFF was involved in a suicide pact. Instead, armed with a tube of lip gloss and an ancient grimoire, Mila does the unthinkable to uncover the truth: she brings the girls back to life.
Unfortunately, Riley, June, and Dayton have no recollection of their murders, but they do have unfinished business to attend to. Now, with only seven days until the spell wears off and the girls return to their graves, Mila must wrangle the distracted group of undead teens and work fast to discover their murderer…before the killer strikes again.
INTERVIEW with Lily Anderson
at Tales of the Ravenous Reader
By the power of three. What 3 things do you want readers to know about Undead Girl Gang?
1. It’s a comedy where sad things happen.
2. There are a lot of hidden and not-so-hidden references to famous witches.
3. It’s my personal favorite of the three published books I have out so far!
Nothing is stronger than sisterhood! I just saw the new Charmed series trailer and all I can think about is the Undead Girl Gang and it’s message of female empowerment interweaved with a Latina vibe. Why is it so important to have diverse reads, especially those that embrace Latin culture.
Well, first off all, we need diverse reads because we’ve waited long enough for them! Latinx readers deserve to see themselves in all media. Art is how we process the world. How are we supposed to do that if we aren’t included?
But I also think it’s so important to showcase how culturally different people are. There’s this bizarre misapprehension that I come up against repeatedly as a woman of color where white people think that because there’s is the dominant culture, it’s the only culture. Or that the only way to appreciate a culture is by appropriating it. I think the more we showcase the different ways we move about in the same spaces, the more we can build a culture of inclusion and celebration.
If your girl gang could harness their powers to cast any spell to empower women what would it be and why?
Oh, the girls would fight endlessly about this! June would want to empower all women to be leaders (like her). Riley would want to empower all women to be fearless. Dayton would want all women to be happy. Mila would want all women to feel secure in themselves. So, to give everyone a little bit of what they want, the spell would end up being empowering all women to speak up. Say no when you mean no. Say “that hurt my feelings.” Say “when you do that, it makes me feel bad.” Too often, women feel the need to be passive or biddable. To be nice instead of heard.
Communicating clearly and empathetically, especially with other women, is what empowers my girl gang (both in fiction and in my real life friendships!) and I would wish that for absolutely all women.
What made writing Undead Girl Gang different than your previous novels?
Because my first two books were retellings, it was a little easier to outline them around their preexisting story structure. With Undead Girl Gang, there was more freedom, which meant way more opportunities to veer way off the plot! I had to be extra careful about sticking to my outline. Also this is the first book I’ve ever written that included magic! I had to keep a separate document of just all of the magical rules to make sure that I didn’t have the undead girls or the spells acting contrary to the rest of the book.
What are you working on now and what can you tell me about it?
Right now, I’m finishing up a draft of my first dramatic novel–a love story with no jokes and a lot of politics. I’m also outlining another comedic magical story so that I’ll have something fun to work on after all this seriousness.

What diverse reads do you wish everyone had on their book shelves?

I wish everyone had all of the books written by Anna-Marie McLemore, Laura Esquivel, Octavia Butler, Brit Bennett, and the poems of Nikki Giovanni. For romance readers, everyone should be reading Alyssa Cole, Beverly Jenkins, Jeannie Lin, and Zoraida Cordova/Zoey Castile.
Thank you Lily 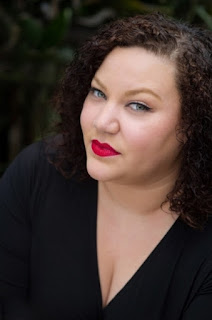 Yes, I would give up coffee AND beer for a free lifetime supply of Evian.

Other novels by Lily Anderson: 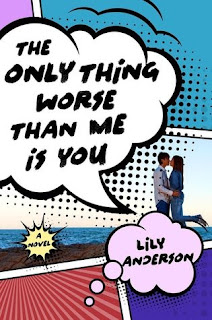 The Only Thing Worse Than Me Is You
Amazon | Barnes And Noble | Indie Bound
Trixie Watson has two very important goals for senior year: to finally save enough to buy the set of Doctor Who figurines at the local comic books store, and to place third in her class and knock Ben West–and his horrendous new mustache that he spent all summer growing–down to number four.
Trixie will do anything to get her name ranked over Ben’s, including give up sleep and comic books–well, maybe not comic books–but definitely sleep. After all, the war of Watson v. West is as vicious as the Doctor v. Daleks and Browncoats v. Alliance combined, and it goes all the way back to the infamous monkey bars incident in the first grade. Over a decade later, it’s time to declare a champion once and for all.
The war is Trixie’s for the winning, until her best friend starts dating Ben’s best friend and the two are unceremoniously dumped together and told to play nice. Finding common ground is odious and tooth-pullingly-painful, but Trixie and Ben’s cautious truce slowly transforms into a fandom-based tentative friendship. When Trixie’s best friend gets expelled for cheating and Trixie cries foul play, however, they have to choose who to believe and which side they’re on–and they might not pick the same side. 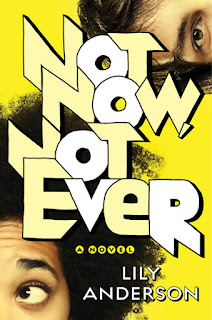 Now Now, Not Ever

Elliot Gabaroche is very clear on what she isn’t going to do this summer.

1. She isn’t going to stay home in Sacramento, where she’d have to sit through her stepmother’s sixth community theater production of The Importance of Being Earnest.
2. She isn’t going to mock trial camp at UCLA.
3. And she certainly isn’t going to the Air Force summer program on her mother’s base in Colorado Springs. As cool as it would be to live-action-role-play Ender’s Game, Ellie’s seen three generations of her family go through USAF boot camp up close, and she knows that it’s much less Luke/Yoda/”feel the force,” and much more one hundred push-ups on three days of no sleep. And that just isn’t appealing, no matter how many Xenomorphs from Alien she’d be able to defeat afterwards.

What she is going to do is pack up her attitude, her favorite Octavia Butler novels, and her Jordans, and go to summer camp. Specifically, a cutthroat academic-decathlon-like competition for a full scholarship to Rayevich College, the only college with a Science Fiction Literature program. And she’s going to start over as Ever Lawrence, on her own terms, without the shadow of all her family’s expectations. Because why do what’s expected of you when you can fight other genius nerds to the death for a shot at the dream you’re sure your family will consider a complete waste of time?

This summer’s going to be great.

GIVEAWAY
A signed copy of UNDEAD GIRL GANG and a pin