I wanna know – what music fandoms do you belong to? Grace and the Fever is one girl’s story about coming into adulthood with her fandom, including the sudden fame of being associated with her favorite band. Those of us within music fandoms know how fast gossip can run and how tough it is behind the scenes.

I am a diehard #ATLHustler, which I think most people know. I’ve been a Hustler for 10 years now and there’s no going back.

How you know I’m an ATLHustler (aka fangirl):
Five Reasons Why Fangirls Will Love Grace and the Fever

“People always try to pretend like fandom is some freaky subculture, but honestly, I don’t think it’s that far off from what most people do with celebrities, or even, like, the people you don’t know well at school, you know? It’s so hard to understand that other people are people, so we create them for ourselves. We create whole worlds to live in, and that’s fine. That’s necessary, I think, sometimes—and sorry to sound like a textbook, but it’s especially necessary if you’re a teenage girl living in a patriarchal culture. Which you are, and I was, until recently. A teenager, I mean. The patriarchy is still alive and well.”

Even when she’s complicated and the boys are confusing, the music is just what it is. The song lasts four minutes, maybe just three and a half. No time to get sentimental. All she can do is raise her hands and open her mouth, close her eyes, sing along.

Her mother hated Grace being a Fever Dream fan: all the fantasizing and the wasted hours. You don’t know those boys, she used to say. I’m sure if you met them, you wouldn’t like them at all, and then wouldn’t you feel silly? That was the beginning, Grace has always thought, of the particular deep rift that’s between them now: her mother didn’t want to hear about Fever Dream, so Grace stopped talking about them. When she did, she found out that it was almost too easy to stop talking about other things, too.

Grace has always wondered about this: what it’s like to have someone you’ve never met before come up to you and say, You saved my life, and not just one of them, but hundreds of thousands, legions of people pinning their existence on you and your band and your songs. 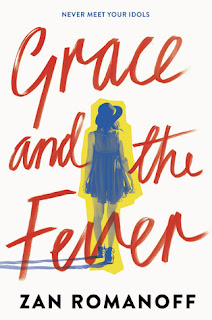 In middle school, everyone was a Fever Dream fan. Now, a few weeks after her high school graduation, Grace Thomas sometimes feels like the only one who never moved on. She can’t imagine what she’d do without the community of online fans that share her obsession. Or what her IRL friends would say if they ever found out about it.
Then, one summer night, the unthinkable happens: Grace meets her idol, Jes. What starts out as an elusive glimpse of Fever Dream’s world turns into an unlikely romance, and leads her to confront dark, complex truths about herself and the realities of stardom.
Add a Comment
Share