I had the chance to see Nidhi speak at SDCC and have been anxiously awaiting Pashmina’s release since! I absolutely loved this sweet story and recommend it to anyone looking to learn a little more about Indian culture.

Pashmina is the story of Priyanka, an Indian-American girl who is like most teens – troubling to communicate with her mother and trying to figure out who she is. She’s curious about India and her father. Whenever she asks about them, her mom changes the subject. Nidhi uses facial expressions from panel to panel to show that there’s more going on than Pri and the reader know.

Before we can blink, Pri finds herself transported to the colorful land of India, brought on by a mysterious pashmina that was tucked away. The use of color versus the monotone of the contemporary world will transport readers into this universe. The pashmina opens up not only a world but a door to the answers she has been seeking.

I enjoyed the flow and length of Pashmina. I loved the glossary of terms at the end and also Nidhi’s use of Indian terms within the text. It’s short and sweet and to the point, making it an enjoyable read for all ages! 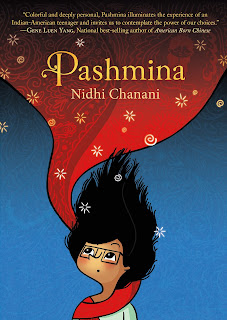 Priyanka Das has so many unanswered questions: Why did her mother abandon her home in India years ago? What was it like there? And most importantly, who is her father, and why did her mom leave him behind? But Pri’s mom avoids these questions―the topic of India is permanently closed.
For Pri, her mother’s homeland can only exist in her imagination. That is, until she find a mysterious pashmina tucked away in a forgotten suitcase. When she wraps herself in it, she is transported to a place more vivid and colorful than any guidebook or Bollywood film. But is this the real India? And what is that shadow lurking in the background? To learn the truth, Pri must travel farther than she’s ever dared and find the family she never knew.
In this heartwarming graphic novel debut, Nidhi Chanani weaves a tale about the hardship and self-discovery that is born from juggling two cultures and two worlds.

Nidhi Chanani is a freelance illustrator, cartoonist and writer. She is the owner of Everyday Love Art. Her debut graphic novel, Pashmina, will be released by First Second Books in October 2017. She recently illustrated Misty – The Proud Cloud, a children’s book by Hugh Howey. She is an instructor in the Master of Fine Arts, Comics program at the California College of Arts.
Nidhi was born in Calcutta and raised in suburban southern California. She holds a degree in Literature from the University of California, Santa Cruz. She creates because it makes her happy – with the hope that it can make others happy, too. In April of 2012 she was honored by the Obama Administration as a Champion of Change.
Her media appearances include CNN’s Anderson Cooper 360 and BBC Radio. Her work has been featured on the Huffington Post, the Women’s March, My Modern Met, Bored Panda and India Times. Nidhi has worked with Disney, ABC, Airbnb, Sony, Microsoft, State Farm Insurance and a variety of other clients. Her non-fiction comics have appeared in the Nib. Everyday Love Art products are sold in retail shops across the country, including the San Francisco International Airport, Books Inc., and Therapy stores.
Nidhi draws and dreams every day with her husband, daughter and their two cats in the San Francisco Bay Area.
Website | Twitter | Goodreads | Facebook | Instagram
Follow the Tour