Howdie!! And thank you for joining us for a spell during our blog tour stop for RETRIBUTION RAILS by Erin Bowman hosted by Rockstar Blog Tours. We are big fans of Erin’s companion series Vengence Road and just jumped at the chance to participate and ask Erin some questions about her newest release. So saddle up and stay a while and we hope you enjoy our interview and don’t forget to follow the other stops on this tour and enter in the giveaway at the end.
RETRIBUTION RAILS
Title: RETRIBUTION RAILS
Author: Erin Bowman
Pub. Date: Novemner 7, 2017
Publisher: HMH Books for Young Readers
Pages: 288
Formats: Hardcover, eBook
Find it: Amazon, B&N, iBooks, TBD, Goodreads 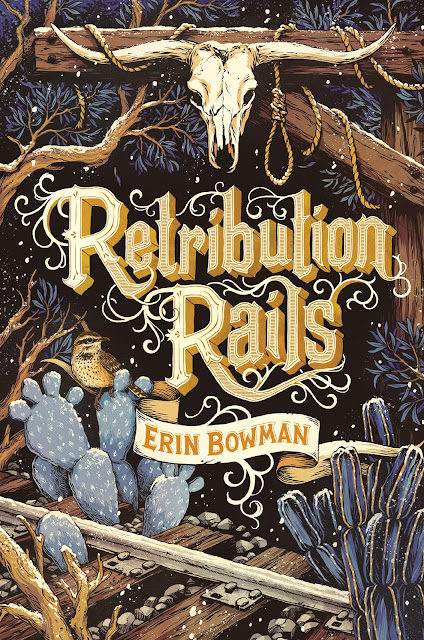 REDEMPTION IS NEVER FREE
When Reece Murphy is forcibly dragged into the Rose Riders gang because of a mysterious gold coin in his possession, he vows to find the man who gave him the piece and turn him over to the gang in exchange for freedom. Never does he expect a lead to come from an aspiring female journalist. But when Reece’s path crosses with Charlotte Vaughn after a botched train robbery and she mentions a promising rumor about a gunslinger from Prescott, it becomes apparent that she will be his ticket to freedom—or a noose. As the two manipulate each other for their own ends, past secrets are unearthed, reviving a decade-old quest for revenge that may be impossible to settle.
In this thrilling companion to Vengeance Road, dangerous alliances are formed, old friends meet new enemies, and the West is wilder than ever. 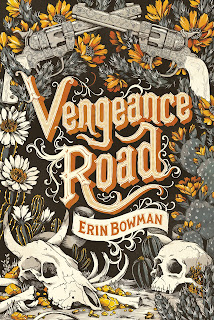 About The Book:
Title: VENGEANCE ROAD
Author: Erin Bowman
Pub. Date: September 1, 2015
Publisher: HMH Books for Young Readers
Pages: 336
Formats: Hardcover, eBook
Find it: Amazon, Barnes & Noble, iBooks, TBD, Goodreads
When Kate Thompson’s father is killed by the notorious Rose Riders for a mysterious journal that reveals the secret location of a gold mine, the eighteen-year-old disguises herself as a boy and takes to the gritty plains looking for answers and justice. What she finds are devious strangers, dust storms, and a pair of brothers who refuse to quit riding in her shadow. But as Kate gets closer to the secrets about her family, she gets closer to the truth about herself and must decide if there’s room for love in a heart so full of hate.
In the spirit of True Grit, the cutthroat days of the Wild West come to life for a new generation.

Interview with Tales of the Ravenous Reader

1.  Readers may not know that Retribution Rails and its predecessor, Vengeance Road, are companion novels. It isn’t a sequel. Although they’re set in the same world, during a similar time. What else can you tell our readers about Retribution Rails?
Yes, RR is a companion. It takes place in 1887, ten years after the events of VR, and in those ten years, the landscape of Arizona changed dramatically. Trains are now crisscrossing their way across much of the Territory.
One of RR’s main characters is Reece Murphy, also known as the Rose Kid, who targets these rail lines with the Rose Riders gang. Anyone who’s read VR will recognize this gang’s name. It’s back in business now and run by the half-brother of the original gang’s leader. Reece doesn’t want to ride with these outlaws, but he’s being held hostage for information; only Reece can identify the man who killed his boss’s brother.
The other main character in RR is Charlotte Vaughn, an aspiring journalist who aims to write a breakout piece on the railroad to kick-start her career.  Her path crosses with Reece’s, and chaos ensues. Their paths also cross with some beloved characters from VR, because what is a companion novel without a cameo from characters of the first book?
2.  Retribution Rails is a great story that has wild west adventures filled with intrigue, criminals, debts, justice, romance (which is always my favorite) and characters that seem to be fueled by fire. It starts off with a train robbery and doesn’t stop until it’s ridden off into the sunset and leaves you pining for more. What kind of research went into creating such a fantastically mesmerizing story that makes you want to watch westerns for days?
So much research! One of the most useful resources for me while researching this book was newspaper archives. On New Year’s Day 1887, my characters stumble into Prescott to discover a gala parading through the streets. The city was celebrating the completion of the Prescott & Arizona Central rail line, and thanks to an online newspaper collection, I was able to clearly recreate that day. Many of the details you’ll find in the book—the procession’s route through town, the band and spectators, the rifle salute, and even the speeches given at the grandstand—are pulled directly from the Arizona Weekly Journal.
3.  What I admire most about this series is how you take a great Western and shape it subtly for contemporary readers. How did you go about creating that feel for Retribution Rails and was it stubborn as a mule or easy as pie?
Thank you! That’s always been my goal with these books—to write a western with modern sensibilities! Crafting this world successfully has been the product of a lot of research, plus a lifelong fascination with this era in American history.
Certain things have always come easily. The dialect, for instance. Don’t ask me how, but the rough, sparse voices of characters like Kate and Reece have been clear to me from day one. Other aspects of these books have been challenging. Charlotte’s motives in RR took me awhile to figure out. I had to rewrite her pages twice as many times as Reece’s. There’s also the problem of logistics. Sometimes I wanted to get characters from point A to point B in a couple hours, but the nature of the world didn’t allow it. Horseback and stagecoach just isn’t that speedy. I spent a lot of hours lamenting the technology of the era and scribbling timetables into my notebook until my plot was both well-paced and historically feasible.
4. There are several lines in your book that stand out to me and one of them is:
“Reece Murphy was a boy who became a man while riding with the devil.”
What was your favorite chapter or passage to write and why?
Again, thank you! That is one of my favorite lines in the book. Funnily enough, it’s also a line I wrote before I’d drafted any of the novel. I use a book called The Anatomy of Story by John Truby to plot all my stories, and one of his worksheets has you figure out your book’s theme. I wrote one for each main character in my outlining notebook and Reece’s was: “A boy becomes a man while riding with the devil.”
I don’t have a favorite chapter, so much as section: I’m really proud of the entire climax of RR. The alternating narration, the way the stakes continue to get raised, how everything comes to a head. It was thrilling to write, and hopefully it’s thrilling to read, too.
5. Can you tell us what you are working on next?
I just finished my final read-through of CONTAGION, my sci-fi thriller out in July 2018 from HarperTeen. It’s the first in a duology, which means I’m also currently busy revising the sequel. And because publishing works years in advance, I’ve been batting around new book ideas, trying to decide what I want to write next. Maybe there’s another western in me. Who knows! 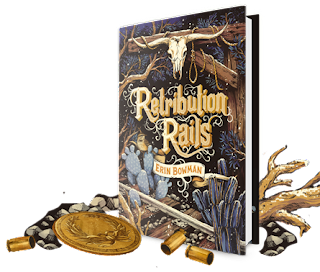 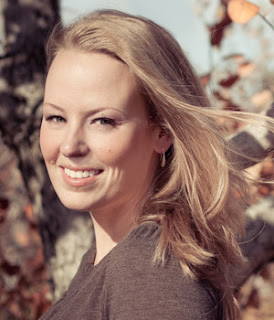 About Erin:
Erin grew up in rural Connecticut, where she spent most of her childhood telling stories. It is rumored that her first words were not “Mama” or “Dada,” but “Once upon a time.” In middle school, when kids were going off to sleep-away camp for the summer, Erin was attending writing camp and penning short stories.
She studied web design (and minored in Creative Writing because she couldn’t stay away from stories) at the Rochester Institute of Technology in upstate New York. After several years working in advertising and designing websites for various brands, she moved from Boston to New Hampshire, where she now lives with her family and writes full-time.
When not writing, Erin can often be found hiking, geeking out over good typography, and obsessing over all things Harry Potter. She drinks a lot of coffee, buys far too many books, and is not terribly skilled at writing about herself in the third person.
She is represented by Sara Crowe of Harvey Klinger, and is the author of the Taken Trilogy (available from HarperTeen) and Vengeance Road (HMH Books for Young Readers).
Find Erin on the web: