Hands up if you were/are the biggest Veronica Mars fan. My love for LoVe is never ending, unlike the series that finished up with a movie (and several books). But not to worry – the Trouble series will give any VM fan a taste of mischief, unforgettable characters, and a romance you won’t soon forget. In honor of Digby + Zoe and Veronica + Logan (excuse me but Duncan was NEVER an option but I totally dabbled in #TeamPiz for a bit), we are talking about three infamous crime fighting duos in history. 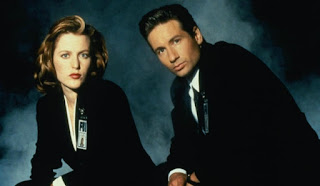 Is there a more iconic crime fighting duo with a romantic twist than our fav alien fighters Scully and Mulder? No, there is not. There’s even a shipping guide if you want to dive straight into the romance side of the pair.
Head on over to our collaboration with Kelly @bookcrushin to see who the others are! 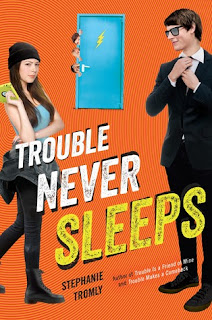 TROUBLE NEVER SLEEPS
by Stephanie Tromly
Published: April 24th, 2018
Publisher: Kathy Dawson Books
Find It
Happily Ever After gets a serious makeover in this swoony, non-stop, thrill-ride of a conclusion to the Trouble Is a Friend of Mine trilogy
No one makes getting into trouble look as good as Philip Digby—and he looks good doing it. Now that he’s back in town, he’s plunged Zoe (and their Scooby Gang of wealthy frenemy Sloane, nerd-tastic genius Felix, and aw-shucks-handsome Henry) back into the deep end on the hunt for his kidnapped sister. He’s got a lead, but it involves doing a deal with the scion of an alarmingly powerful family, not to mention committing some light treason. Zoe and Digby are officially together now, and she’s definitely up for whatever closure this new caper might offer, even though this mystery will come with a twist neither expected.
With acerbic banter, steamy chemistry, and no small amount of sarcasm, Zoe and Digby are the will-they-or-won’t-they, charismatic crime solving couple you’ve been waiting for.
Add a Comment
Share