SVCC has become a favorite of mine thanks to the mash-up of science, comics, movies/tv, and tech! The con basically embodies the best parts of Silicon Valley. Last year, the NASA panels and display stole the show and my heart so I was thrilled to attend again this year.

Of course, I couldn’t do it without a little cosplay. This year I did an everyday cosplay of Kate Bishop, resident Hawkeye and smartass that I can’t get enough of.
Besides spending time at the NASA booth learning about the GeneLab (WHYYYYY didn’t I stick with the biology/genetics degree? So cool!), I went to three panels and had my Rise of the Black Panther comics signed. 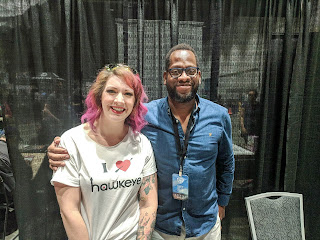 Getting to know Evan Narcisse was such a treat. Marvel is DOING THE THING and by doing the thing I mean inviting passionate people to do the projects we all want. Rainbow Rowell is writing Runaways because she loves them and she writes for teens and Evan is basically the biggest T’Challa knowledge base. Rise of the Black Panther is so popular that I couldn’t find a physical copy of #1 ANYWHERE.
The first panel I went to was on worldbuilding, moderated by Evan Narcisse and featuring creators from Rogue One, Orphan Black, Halo, Teen Titans, etc…

If you can’t write the rules on the back of a napkin, you’ve made your worldbuilding too complex.

(This is my main problem with reading fantasy.)

We also went to a panel on robots and – uh – yeah, bring on the pizza delivery robots.

The audience overwhelmingly agrees – people will let a pizza delivery robot in their home.

Then the best part of the day…Evan’s panel. I vote we never have panel after panel with white male cishet creators again. This was such a rich discussion and I could have listened way past the hour we got.