Finding a good mystery in YA is tough. Many adult mysteries are focused around something criminal, and often murder. Harder to put a teen in those circumstances. It’s not a shock to me that Sky Pony’s The Bakersville Dozen hits the spot for mystery for me (because I adore everything they put out).
Our senior year would have been so much different without this stupid video.
We live in a digital age, where bullying takes place in cyberspace and no one really shuts off. So when twelve girls at Bakersville are secretly taped and given slanderous nicknames, you think it can’t get much worse. Until they start going missing. And here begins our version of Clue – but instead of “Who killed Mary in the dining room with the candlestick?” it’s “Who made this tape and how is it connected to girls who are going missing…and then some.”
“She has to be breathing.” Tripp leaned down, his cheek inches from Becca’s puffy mouth. “I don’t think so.” We’d failed. On every level.

Mystery is one of my favorite genres but so often the mystery isn’t a mystery at all, it’s just sensationalism. What I loved the most about The Bakersville Dozen is at some point, I suspected every single person. I was just chuckling to myself while looking at my notes. “It’s totally x” “Well, it can’t be x, can it?” EVERYONE is a suspect and I honestly did not figure it out along the way.

I was pretty sure their thoughts were an exact echo of my own—It could have been me. It could have been me. Holy fucking shit, it could have been me . I felt it then, my responsibility to keep them safe weighing heavier than ever.
Tension is high when everyone is under the microscope. I’m talking edge of your seat, one sitting kind of tension. Surviving your senior year is tough enough without the extra possibility that you could be kidnapped and it could be your brother/boyfriend/best friend/the police.
Trust no one. 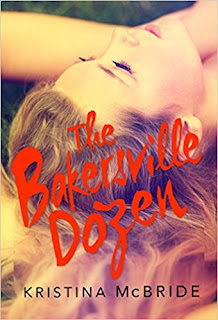 You have four days to locate five treasured trophies. Break the rules and you all die. Happy hunting!
Back in September, the town of Bakersville, Ohio made national news when a video went viral featuring thirteen of the high school’s elite in compromising positions. Now it’s May, and every month since the “Bakersville Dozen” made their infamous appearance on the national stage, one girl has gone missing. Officials are no closer to identifying the criminal.
Bailey “Like a Virgin” Holzman is getting really fed up with the scrutiny. She just wants to enjoy the rest of her senior year and have an epic summer before heading off to college. So when she discovers a note in her locker on the last day of school inviting her on a scavenger hunt, she thinks it’s just a sweet surprise from her boyfriend trying to cheer her up.
But following the clue leads her, instead, to the first official casualty. And another sinister envelope. The killer is close, and it could be anyone. Even the people Bailey’s always trusted most—her best friend, her perfect boyfriend, or the boy-next-door she’s always pined for.
With the clock ticking, she faces a terrifying choice: play the game by the killer’s rules—follow the clues, tell no one, and no cops—for a chance to save the rest of the missing girls, or risk becoming the next grisly victim.
Add a Comment
Share