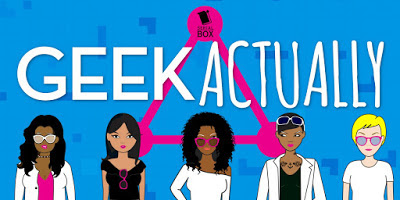 Maybe you missed my obsession coverage of ReMade, a YA weekly serial that I gushed over for 15 weeks in the fall/winter. NOT A PROBLEM because we are back today with another amazing serial – Geek Actually!
The last two episodes have felt like things were building up to a big explosion – and last week I left feeling a serious sense of dread for Taneesha. If there’s one thing I’ve learned about the internet, it’s that the Reddit/4Chan neckbeard trolls will ruin your life if they see fit. Taneesha is left high and dry by her company – honestly, no surprise there. I hope this gives her the motivation to GTFO (and get a lawyer).

On the flip side, we are watching Michelle go down her new path and boy, is that enjoyable! But seriously, fuck Ted. I really can’t stand her ex.

I’m looking forward to the next episode, where I hope we will get a peek at how Elli is doing at her new job and maybe some more insight into what’s going on with Christina and Vivi. Anyone else feel Christina was particularly INTENSE this week?

Come back weekly for mini reviews! As always, the first episode is free on audio and ebook – so you can try it out! 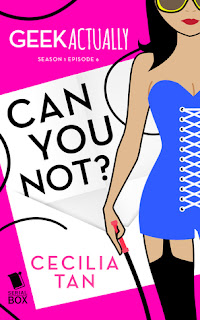 Can You Not?
by Cecelia Tan
Published: July 12th 2017
Publisher: Serial Box
Source: Publisher
Meet your new best girlfriends. Michelle is a hard-nosed Science Fiction editor who is used to things going her way; Taneesha is a talented video game programmer who is used to being the odd (wo)man out. Aditi is a fantasy writer on the verge of her big break; Christina is a rebel on the sidelines of Hollywood. And Elli is a fan – of anything and everything that keeps are from “proper adulting.” Together they are Rebel Scum (at least in their shared group chat), and best friends through thick and thin. They might live far apart but through the power of the internet and a shared love of all things geek, they are ready to face the world side by side.
This is the 6th episode in the first season of Geek Actually, a 13-episode serial from Serial Box Publishing. This episode was written by Cecilia Tan.
Every lady geek has heard about other lady geeks being harassed, but Taneesha never thought it would happen to her. But she finds herself living a nightmare when the coworker she beat at Warcraft makes his beef with her public online. Michelle finds some like-minded people at a kinky party…but realizes that she’s still figuring out what turns her on and what definitely turns her off.
Add a Comment
Share