If you know me, you know I stray away from books featuring mental health issues. I chose to dive straight into The Art of Starving and was NOT disappointed.

Matt is hungry. Hungry for power. Hungry for acceptance and love. Hungry for food because he is starving himself. And through this hunger, Matt feels that he has developed superpowers. The power to hear more clearly, the power to pick up on unnoticeable scents, the power to read minds. If you’ve read about eating disorders, you may have noticed that people with EDs claim to experience heightened senses. So there is an air of truth to Matt’s experience. Sam Miller does an excellent job of pairing Matt’s abilities alongside the experiences he is having. Readers are told from the beginning that Matt has a history of mental illness, and he’s supposed to seek help (he doesn’t). Readers also get closure and answers at the end of the book.

Matt is hurting. He’s frequently unable to control his emotions. He’s got some serious shit going on at home and school, within himself and within his social construct. Anorexia is Matt’s way of giving himself power. Within The Art of Starving is also a tender love story between Matt and another character, which includes a sex scene that gives us a bit of reality. Friendship becomes a key takeaway.

On top of Sam’s beautiful and engaging writing, we get diverse and rich characters that feel like you could reach through the pages and touch them.

For all of these reasons, I high recommend The Art of Starving for fans of the following stories (and vice versa):

We Are the Ants by Shaun David Hutchinson (At the Edge of the Universe, too!)
History is All You Left Me by Adam Silvera
Girl in Pieces by Kathleen Glasglow
Only one in ten people with an eating disorder receive treatment.
If you or anyone you know has an eating disorder, please contact the hotline below or see your doctor. 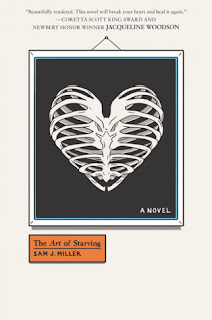 THE ART OF STARVING
by Sam J. Miller
Published: July 11th 2017
Publisher: HarperTeen
Source: Publisher
More Happy Than Not meets Glory O’Brien’s History of the Future in this gritty, contemporary YA debut about a bullied gay teen boy with an eating disorder who believes he’s developed super powers via starvation.
Matt hasn’t eaten in days.
His stomach stabs and twists inside, pleading for a meal. But Matt won’t give in. The hunger clears his mind, keeps him sharp—and he needs to be as sharp as possible if he’s going to find out just how Tariq and his band of high school bullies drove his sister, Maya, away.
Matt’s hardworking mom keeps the kitchen crammed with food, but Matt can resist the siren call of casseroles and cookies because he has discovered something: the less he eats the more he seems to have . . . powers. The ability to see things he shouldn’t be able to see. The knack of tuning in to thoughts right out of people’s heads. Maybe even the authority to bend time and space.
So what is lunch, really, compared to the secrets of the universe?
Matt decides to infiltrate Tariq’s life, then use his powers to uncover what happened to Maya. All he needs to do is keep the hunger and longing at bay. No problem. But Matt doesn’t realize there are many kinds of hunger… and he isn’t in control of all of them.
A darkly funny, moving story of body image, addiction, friendship, and love, Sam J. Miller’s debut novel will resonate with any reader who’s ever craved the power that comes with self-acceptance.
Add a Comment
Share