Hey everyone! We are SO EXCITED for Project Pandora, a YA thriller that will keep you up at night! Told through case notes, reports, and accounts, Project Pandora will keep you entertained the whole way through and leave you wishing you had the sequel. Check out our interview with Aden and be sure to enter the GIVEAWAY at the end of the post!

We love the format of case notes, reports, and accounts. What lead you to this style of writing and what did you find most challenging?

Although Project Pandora takes place in modern America, it has a strong sci-fi element. I added the found documents as a way to add authenticity to the story, heighten that sci-fi element, explain backstory, and explore the characters’ motivations. I thought by showing these things through interview transcripts and status reports, it would be more organic than telling about them through dialogue and thoughts.
I love video games, so I would say that also influenced my decision. In many video games, you come across recordings or documents explaining more about things that have happened, so, this definitely had a part in inspiring me.
What I found most challenging about adding the status reports and transcripts was making sure that I didn’t contradict myself and not giving away too much. I wanted to reveal things bit by bit.
Project Pandora is full of mystery and conspiracy. Do you have any conspiracy theories that have fascinated you?
I think the New World Order theory is pretty interesting. It’s weird to wonder if a group of powerful individuals might be controlling things behind the scenes. Conspiracy theories in general interest me. I really like the really outlandish ones, like government officials are actually reptilian cryptids from space.
The “villain” in the story is one of those pesky villains who crosses the line into anti-hero territory. You can’t help but love him. Are there pop culture heroes who inspired his character?
When I first wrote Hades, I didn’t plan to make him become an anti-hero, so his earliest inspirations weren’t heroes. I wanted him to be a compelling villain that readers might feel some sympathy—or at least intrigue—towards. I also wanted him to seem slightly more than human.
One of my inspirations for his character was the monster in Mary Shelley’s Frankenstein. I made a subtle reference to Frankenstein’s monster in the first chapter from Hades’s POV:
“Sometimes, he fantasized about being struck by lightning. Considering that his own birth was, in a sense, by electricity—those volts delivered again and again to electrodes on his temples during electroconvulsive therapy—he thought an actual lightning bolt might transform him into something else entirely.”
I also took inspiration from Satan in Milton’s Paradise Lost. Paradise Lost is my favorite epic poem, and what I find really compelling about it is how Satan is portrayed as this charismatic, eloquent rebel instead of, well, the traditional depiction of the Devil. If anything, Milton’s Satan is far more interesting than the other characters in the epic. But I think this particular inspiration will become more apparent in later books in the Assassin Fall series…
What tv shows or movies would you recommend to pair with Project Pandora?
Definitely the Bourne Identity. Also, other Young Adult thriller adaptions, like the Hunger Games and Divergent.
What characters surprised you the most?
Shannon and Hades. When I began writing the novel, Tyler and Elizabeth came before Shannon and Hades, so I knew who they were from the beginning. I already had a good idea of what their personalities were like. On the other hand, Shannon and Hades were still mysteries to me, so it took time to discover their personalities. 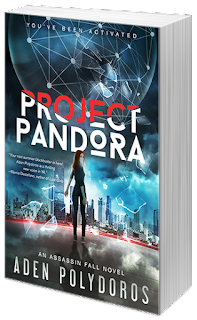 by Aden Polydoros
Publication Date: August 1, 2017
Publisher: Entangled Teen
Find it:
Amazon | Amazon.com.au | Amazon.co.uk | Amazon.ca | B&N | iBooks | Kobo | Entangled
Tyler Bennett trusts no one. Just another foster kid bounced from home to home, he’s learned that lesson the hard way. Cue world’s tiniest violin. But when strange things start happening—waking up with bloody knuckles and no memory of the night before or the burner phone he can’t let out of his sight— Tyler starts to wonder if he can even trust himself.
Even stranger, the girl he’s falling for has a burner phone just like his. Finding out what’s really happening only leads to more questions…questions that could get them both killed. It’s not like someone’s kidnapping teens lost in the system and brainwashing them to be assassins or anything, right? And what happens to rogue assets who defy control?
In a race against the clock, they’ll have to uncover the truth behind Project Pandora and take it down—before they’re reactivated. Good thing the program spent millions training them to kick ass… 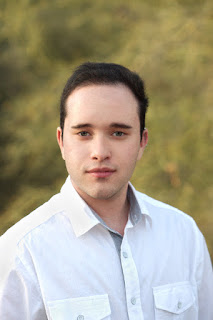 Aden Polydoros grew up in Long Grove, Illinois, the youngest of three children. Aden’s family moved to Arizona when he was in second grade. As a kid, he spent much of his time exploring the desert near his home. When he wasn’t searching for snakes and lizards, he was raiding the bookshelves of the local library. As a teenager, Aden decided that he wanted to be a writer. He spent his free time writing short stories. He was encouraged by his English teacher to try his hand at writing a novel, which inspired him to begin PROJECT PANDORA. The YA thriller is set for publication with Entangled Publishing in Summer of 2017. He is represented by Mallory Brown of Triada US.
Website | Twitter | Facebook | Goodreads
TOUR SCHEDULE