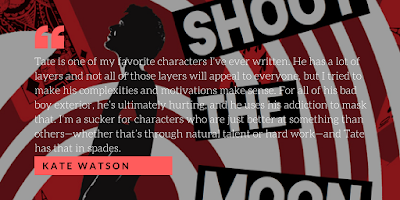 With Tate, you took a character that should be unlikeable and made the audience like him. What personality traits make him so tough to hate and how did his character come to you?

Tate is one of my favorite characters I’ve ever written. He has a lot of layers and not all of those layers will appeal to everyone, but I tried to make his complexities and motivations make sense. For all of his bad boy exterior, he’s ultimately hurting, and he uses his addiction to mask that. I’m a sucker for characters who are just better at something than others—whether that’s through natural talent or hard work—and Tate has that in spades. He’s brilliant at reading people, a trait he comes by naturally that he has honed to a careful science. Unfortunately, he’s been using his powers for evil instead of good, and he has a comeuppance to face.

“A wild journey into the depths of addiction, evoked with such intensity that readers may find themselves short of breath.” — Booklist

However, at his core, Tate isn’t a bad person. He’s torn. He understands that his actions have consequences and that they’re hurting the people around him. But, like any addict, he isn’t ready to face that he has a problem and he isn’t sure how to address that problem, even if he were to admit the truth. I tried to place characters around him, especially his sponsor, Nia, who softened his sharp edges and made us (and him) see the truth behind his lies. I hope readers will connect with him and his struggles!
In Shoot the Moon, Tate is faced with an addiction he initially refuses to accept. What was your research process like get his part of his character arc right?
My research was abundant for this book. In addition to reading YA books about gamblers and addicts for literary research, I read the memoir of a gambling addict and spent a great deal of time on addiction forums. I visited virtual GA (Gambler’s Anonymous) meetings and sites and pored over GA literature. In addition to needing to understand a poker addiction, though, I had to try to understand replacement fixes, like how Tate uses lottery scratch-off tickets. That was a fascinating and heartbreaking bit of research. I recruited a clinician to read the manuscript for accuracy, and I also had a beta reader who has intimate knowledge of addiction.
Reading what real addicts suffer was difficult, and for as much as I wanted to be authentic, the fact is that Tate got off lucky compared to most.
With Shoot the Moon living in the classically-inspired space, which classic characters could you see being best friends (or worst enemies!) with Tate and Alex?
Oh, this is hard! Alex is obviously inspired by Estella from GREAT EXPECTATIONS, so those girls would be two miserable peas in a pod. I see Tate and Gastby being fast friends, neither of them being willing to hold the other to any sort of standard of behavior. But eventually, both Tate and Alex would tire of people who enable them. Tate seeks out people who challenge him to be better. His best friendships are always with women who cut through the crap and make him face himself, so Jane Eyre would probably be an excellent friend to and foil for him. And Alex, who craves a real connection with someone who sees her, would do well with a patient, long-suffering friend like Jane Bennett or John Watson.
What’s a classic book that deserves a re-imagining/retelling? Any thoughts on who should tackle it?
I would love to see a good retelling of THE COUNT OF MONTE CRISTO! My favorite retellings of the last few years have been by Katie Nelson and Brittany Cavallaro. Katie’s update of THE GREAT GATSBY absolutely blew me away. She writes from the male POV with ease, and she puts a modern spin on outdated plot points and events that make them so accessible for today’s readers. Similarly, Brittany’s gender-bent Sherlock Holmes is done as well as any retelling I’ve ever read, and she has become an auto-buy author for me. I think either woman would do a killer adaptation of THE COUNT OF MONTE CRISTO.

Shoot the Moon is your second YA book. How was writing Shoot the Moon different than Seeking Mansfield? What would you tell debut authors who are starting their second book?
They were so different! SEEKING MANSFIELD was an act of pure inspiration at a time when I had no deadlines or expectations, only hopes. SHOOT THE MOON, on the other hand, was sold on synopsis and came with a deadline attached. My editor was lovely and never pushed me, but the ticking clock element of it—and knowing I was hedged in to the synopsis—were tricky to deal with. I think I would have written the same story either way, but I wouldn’t have stressed about it as much. To debut authors tackling their sophomore novel: I feel your pain. Hang in there, try to put the pressures out of your mind, and when that fails, I send you all the virtual caffeine and candy.

Kate Watson is a young adult writer, wife, mother of two, and the tenth of thirteen children. Originally from Canada, she attended college in the States and holds a BA in Philosophy from Brigham Young University. A lover of travel, speaking in accents, and experiencing new cultures, she has studied in Israel and lived in Brazil, the American South, and now calls Arizona home.
For several years, Kate worked as a senior director for a private university and was one of the faces of a national ad campaign for the university. Shortly following the birth of her first child, she chose to stay home full time and focus on her family and her writing.
Her first novel, SEEKING MANSFIELD, debuted in 2017. A passionate adoption advocate, she is also a contributor to Eric Smith’s WELCOME HOME adoption anthology. Her second book, SHOOT THE MOON, releases February 6th, 2018.
Follow her on social media
http://www.katewatsonbooks.com
https://www.facebook.com/katewatsonauthor/
https://twitter.com/katewatsonya
https://www.instagram.com/katewatsonya/
https://www.goodreads.com/author/show/15094092.Kate_Watson 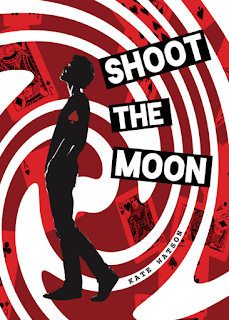 Despite what his brother and sponsor think, Tate isn’t an addict. He has the 30-day chip to prove it. But when his father learns Tate’s been running an illegal card room out of a friend’s dorm to pay off old gambling debts, Tate is cut off. With his family no longer talking to him, his aunt Nora offers him a chance to intern for her political campaign.
Juggling school with the intense internship, Tate finds himself buying scratch-off lottery tickets to take the edge off. Tate is surprised to find the beautiful and calculating Alex Wolf–his first crush and the girl who taught him how to gamble–volunteering with Nora’s campaign, too. Soon, Tate is more drawn to Alex than ever. Her mind games stick in his head, but her vulnerable, softer side gets into his heart.
But as tensions rise along the campaign trail, Tate is forced to question whether he’s really addiction-free, after all.
GREAT EXPECTATIONS meets ROUNDERS in this high stakes tale of the cost of winning and the price of redemption.
Add a Comment
Share